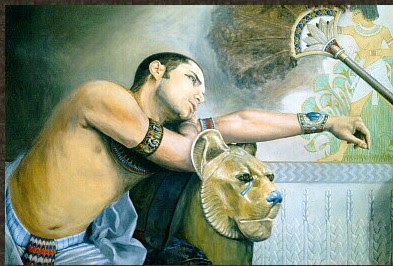 Andy Zermanski has painted for years, since childhood and now is a prolific designer of needlepoint canvases. The pain of the young Pharoah unable to interpret his own dreams is evident in this painting.

The Joseph saga continues. Pharaoh has had two similar dreams and demands their interpretation. None of his advisors can determine their meaning, but his wine steward remembers Joseph from prison and his gift for dream interpretation. Joseph is brought from the prison before Pharaoh. Joseph interprets Pharaoh's dream as seven years of plenty and the seven years of famine that are about to fall upon Egypt. In addition, he suggests ways to manage the plenty to survive the famine. Impressed with his wisdom, Pharaoh appoints viceroy over all of Egypt. Joseph successfully implements his plan, and is married to the daughter of Potiphar and has two sons, Menashe and Ephrayim. As the seven years of famine begin, Jacob sends his sons down to Egypt to seek food. They come before Joseph, who recognizes his brothers, but they do not recognize him. Joseph decides to wait before he reveals himself to them. He demands that they return and bring his youngest brother Benjamin back to Egypt, and to make sure they return, he has Shimon held as a hostage. The brothers do return home and tell their father what happened in Egypt. At first he refuses to allow the remaining child of his beloved Rachel to leave him, but as the famine drags on, he is forced to concede. This time all the brothers return to Egypt. This time Joseph devises a final plot against his brothers. He sends them all back to their home with plenty of food and riches, but he has his personal chalice planted in the Benjamin's bag. After their departure, Joseph sends his steward to accuse them of the theft and bring them back. With a classic cliff-hanger, the parasha ends with the brothers fearfully confronting the angry Egyptian viceroy, not knowing he is their brother.
Posted by DrMom at 10:46 AM