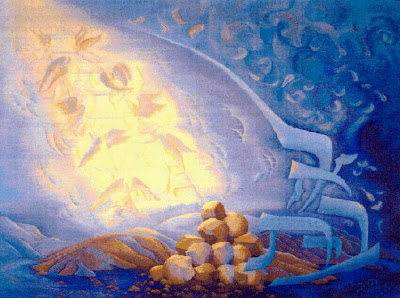 Has any reader noticed that I really like textile work? Perhaps because I have no abilities to work with fiber I really enjoy other's work. This tapestry is from Congregation Beth El in Maryland. Tamar Fishman was the designer and the work was executed by British weaver Pat Jones. The tapestry (one of 2 on the bima) portrays Beth El, the place of Jacob's dream.

When Yakov reaches Mount Moriah, the sun suddenly sets and causes him to sleep there. Rashi says that Yakov invented the Maariv (evening) prayer on this occasion. Yakov lies down to sleep and dreams about a ladder reaching up to heaven with angels ascending and descending. G-d says to him that He will give this place to him and his descendants. G-d says the famous words "ufratzta yomo, v'kedmo, v'tzofono, v'negbo" which means "you shall spread abroad to the west and to the east and to the north and to the south".

After being assured of his safety , Yakov continues on his journey and comes to the outskirts of Lavan's town. (Lavan was his uncle - his mother's brother.)

There, by the well, Yakov meets Rachel, Lavan's daughter, and kisses her and cries. (Our sages explain that the crying was because Yakov foresaw with Ruach HaKodesh that he would not be buried together with Rachel.)

Lavan rushes out to meet Yakov because he expected Yakov to be laden with money, gifts, and jewelry like Eliezer was, one generation earlier, but in this case Yakov was penniless. (Esav's son was sent by Esav to kill Yakov, but Yakov gave him all his money and Esav's son let Yakov live).

Yakov goes to Lavan's house where Lavan has two daughters, Leah and Rachel. Leah's eyes were weak from crying (because, being the older sister, she expected to end up with Esav, the older brother), while Rachel was beautiful.

Yakov loved Rachel and offered to serve Lavan seven years for her. Yakov serves seven years for her, and they seem like a few days to him. Rashi says this refers to Yakov's mother telling Yakov to dwell a "few days" with Lavan. After the seven years, Yakov goes to marry Rachel, but Lavan pulls a switch on him and gives him Leah instead. As a result, Yakov served an additional seven years to marry Rachel. Leah had children right away, but Rachel was barren. By the end of this aliyah Yakov also marries his two wives' handmaids for a total of four wives.

The story continues that Leah's son brings home mandrakes (a type of flower) for his mother. Rachel asks Leah for some of them because they were considered to increase fertility and she didn't have any children yet.

Later Rachel has a son, whom she names Yosef. At that point Yakov asks Lavan for permission to take his wives and children and leave. Rashi says that once Yosef was born, Yakov felt ready to face Esav. Lavan begins to answer Yakov's request to leave by recognizing that he (Lavan) prospered by having Yakov around. This is a lesson to us, we prosper by having righteous people and institutions in our communities.

Yakov gets his wages for serving Lavan. Yakov proposes that Lavan remove all the streaked and spotted sheep from his flock, and Yakov will take care of the remaining sheep. Whenever one of these remaining sheep gives birth to a streaked or spotted offspring it will be for Yakov as wages. Yakov made striped poles for the sheep to view when they were drinking, and as a result they had streaked and spotted offspring, which became Yakov's. In the end, Yakov became very wealthy this way, and Lavan became poor. There are commentaries that say that when Yakov was dealing with the striped poles it was the spiritual equivalent of fulfilling the mitzvah of tefillin.

Later, when Lavan is out shearing his sheep, Yakov takes his family and belongings and tries to slip away to avoid Lavan preventing him. Also, Rachel steals one of Lavan's idols. Lavan catches up with them and complains that he wasn't given the chance to send off his daughters with fanfare. Moreover, he complains about the missing idol. Yakov said "whomever you find your idol with, shall not live". Lavan searches, but doesn't find his idol. (But because the Tzadik Yakov uttered these words, Rachel dies at a young age and is later buried in Beis Lechem.)


The parsha ends with Lavan claims that Yakov's wives are his daughters, and Yakov's son's are his sons. Then Lavan asks Yakov to make a peace treaty, which he does. Afterwards, Yakov continues on his way and sees the angels of the land of Israel who come to greet him and escort him to the land.
Posted by DrMom at 1:34 PM