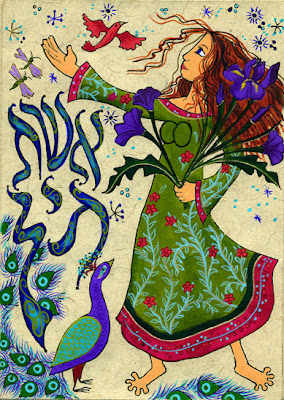 Finding modern images of Dinah was impossible. In my search I found this Woman of Valor from Karla Gudeon, Long Island based artist. I became aware of a forthcoming book called The Torah: A Women's Commentaryas I searched for information about Dinah? This text is the work of the Women of Reform Judaism and will be published next month. Do you remember in the book of Numbers that the women demanded from Moses that they too receive part of the inheritance from G'd? This book is the result of those demands. Rabbi David Young describes why he is going to have a copy- you (we) should have one, too!

A few years ago, in my fifth year of rabbinical school at Hebrew Union College (HUC), my father of blessed memory was visiting my wife Natalie and me. He saw a copy of The Woman’s Bible by Elizabeth Cady Stanton on our bookshelf, which was a text for a class I was taking called “The Bible and Modern Hebrew Writers: Gender Perspectives.” Jokingly he picked up the book and shouted, “Has feminism gone so far that now Natalie needs her own Bible?” “No Dad,” I explained, “that’s mine.”

Too often we gather only to retell the stories of the avot, our paternal ancestors, in our Torah study groups, Bible classes, youth group lessons, etc. We hear stories of Abraham smashing idols, of Isaac favoring his strong son Esau, and of Jacob wrestling angels to a standstill. Examples abound of biblical men performing tasks that would elicit a Tim Allen–style grunt. We have been male-focused for thousands of years. Only recently have we begun the swing toward behaving as an egalitarian religion. Even though we have added the imahot (maternal ancestors) to our daily prayers, it is not often enough that we give them our attention and study their contributions to the Jewish people.

Last November, the Women of Reform Judaism (WRJ) sponsored a nationwide Shabbat of Study dedicated to the women of our heritage. Appropriately, the study day coincided with Parashat Chayei Sarah, the weekly Torah reading entitled, “Sarah’s Lifetime.” Though this Torah portion begins with Sarah’s death (it is named not for its subject matter, but for its opening words, cited above), it takes us through the narrative of Rebekah’s marriage and succession as matriarch, and ends with a listing of Hagar’s descendants. Three powerful women are mentioned in this section, with three important stories to tell.

Giving women the microphone
Usually, the stories of our tradition are told using the male voice. Modern commentaries often add the voices of women to help expand and add to the other voices making commentary, such as Adele Berlin or Nehama Leibowitz. This December, the WRJ will go even further with The Torah: A Women’s Commentary. This new Torah commentary is written entirely by women, giving them not just an opportunity to add to the male voice, but a microphone to address the concerns of contemporary Jewish women, previously unanswered by commentaries.

Often, when men react to undertakings of feminist perspective, we react like my father did. We ask, “Why do you need your own commentary? Why not add to what is already there?” We react by getting defensive, as if the women are creating because the writings of past male commentators do not suffice for them. This is obviously not so with this book. In one section, the commentators cite several textual sources written by men. They neither disregard the male point of view nor contest it. They just write their commentaries with different goals than their male predecessors. The men of the past were teaching a male-dominated culture. Study was for men, and the commentaries addressed male concerns. Today, scholarship transcends gender, and A Women’s Commentary adds some much-needed balance!

There are five types of commentary in this book. The “Central Commentary” expands on the Torah text. “Another View” is a shorter, topical essay. For Parashat Chayei Sarah, the topic focuses on one verse of Torah, written by Tamara Cohn Eskenazi, where she explains Isaac and Rebekah’s unique relationship. “Post-Biblical Interpretations” show how some of the rabbinic sources and interpretations like the ones I mention above relate to women. “Contemporary Reflections” provides a more scholarly commentary of the Torah portion and offers insights based on Talmud as well as contemporary texts. My personal favorite section is “Voices,” which offers creative writings on the Torah in the form of poems about the parashah. It's this section that makes this commentary different from all others. We hear the characters weep, fight, and rejoice together via the poets’ pens.

Already put to good use
I have already used and will continue using A Women’s Commentary in teachings at Temple Sinai in North Miami Beach, where I serve as one of the rabbis. Last year, we participated in the day of study using this book as the main source of commentary, and the results were fantastic. Four of our teachers, professional and lay, led sessions on various aspects of the commentary, including separate sessions for women and men, who then came together near the end of the session to share ideas. We also had a session on creating artistic midrash using A Women’s Commentary, and one dealing directly with the text. All four sessions produced fantastic results.

Our study day was a wonderful opportunity to experience the talents of the women leaders of twenty-first century Judaism. When we realize the tremendous possibilities our teachers have to offer us, we understand the richness and variety of our Jewish traditions. I look forward to the day when we will all be able to hold fast to our Women’s Commentary and say, “That’s mine.”
Posted by DrMom at 2:23 PM