Judaism's first wrestler was Jacob... one of the best was Abe Coleman 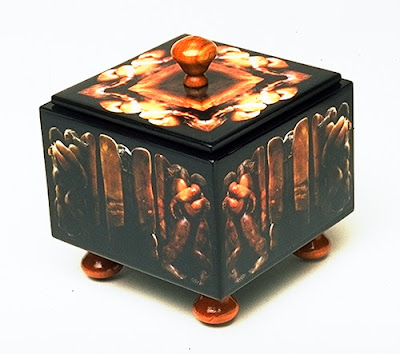 This rendition of Jacob Wrestling the Angel comes from the producer of fine art boxes, Marion Lane.

I am starting to come out of my personal shell and have begun to upload some art work that I have created. The link is to the left under DrMom's Personal Creations. If you are bored, take a moment to check it out. I will update it as new creations are, um, well created!

In a different era, Abe Coleman walked into wrestling arenas filled with tens of thousands of spectators while Mickey Rooney carried his bag. One of the few professional Jewish wrestlers of his time, he was known as the “Hebrew Hercules.”
Still built like a fire pump, Coleman, now 99, moves more slowly than he used to and doesn’t hear so well. His ears are shriveled, a condition that developed from being pummeled for more than 30 years.
Coleman lived in Forest Hills from 1941 until he moved to Meadow Park Rehabilitation and Health Care Center in Flushing two years ago. Though his days of appearing on the Jackie Gleason show are long gone, he is still revered by family and friends. “To me he’s the eighth wonder of the world,” said Willie Bly, a nephew.
One of the stories about Coleman the family loves to tell is how two teenagers tried to mug him on Austin Street in Forest Hills when he was 80. “He practically paralyzed them with two fingers and held them until police arrived,” Bly said. Others say it happened differently, that Coleman gave one of the muggers a left hook and the other a right hook, leaving them both unconscious.
Still, for those who know Coleman, it is his kindness, honesty and empathy that they like to remember. “He didn’t like confrontation. He was sweet and easygoing,” said his niece, Miriam Bly, who visits him nearly every day.
Wrestling at a time when there were virtually no Jewish athletes, Coleman experienced a fair amount of anti-Semitism. Despite his persona in the ring, he walked away from trouble. “He didn’t like to fight,” his niece said.
Coleman was born Abe Kelmer on September 20, 1905 in Poland. His professional wrestling career began in 1929, four years after coming to the United States.
At his 90th birthday party, Coleman told a reporter the story of his first match: “I was working out in a gym in New York. There was a promoter named Rudy Miller. He said, ‘Hey, boy, want to make $25 tonight?’ I said, ‘Yeah.’ He said, ‘Bring your tights to Ridgewood Grove.’”
Coleman won. After that he went on to defeat opponents in Madison Square Garden, Sunnyside Gardens in Queens and St. Nicholas Arena in Manhattan.
A year after his first match he wrestled in Australia. When he returned he became known for introducing the drop-kick to wrestlers in the United States. The move, he said, came to him after watching kangaroos kick. It consists of lifting both feet at once to charge at an opponent and is still widely used today. He was also known for the flying tackle and the aeroplane spin.
In the 1930s, Coleman, who lost many family members during the Holocaust, was dubbed the “Jewish Tarzan,” “Jewish Flash” and “Hebrew Hercules” by sports publicists. His niece said the nicknames were terms of endearment. “It was an affectionate statement. He was Jewish and very strong.”
In his heyday, Coleman weighed 200 pounds, had 18 inch biceps and an 18-1/2 inch neck. He is 5 feet 3 inches tall.
He continued to wrestle throughout the Depression, earning between $10,000 and $12,000 per match, which was about 10 percent of the profits. He used his earnings to support his family and help friends. By 1944, Coleman was reported to have competed against more than 2,000 opponents.
In those days he lived in a hotel on 42nd Street in Manhattan, preferring to wear tailor-made suits and wide-brimmed hats. He spent his nights playing poker and drinking whiskey with other wrestlers. “He hung out with all the big boys,” Willie Bly said.
Some of his better known opponents were Bruno Sammartino, George Zaharias, Angelo Savoldi and George Temple, Shirley Temple’s brother. Twice, he wrestled the Greek champion Jim Londos, who was heavier and nearly four inches taller than Coleman. Each match came to a draw.
While wrestling Man Mountain Dean, who weighed 465 pounds, Coleman picked him up and slammed him to the mat. Both fell through the ring to the auditorium floor.
Another story family and friends tell is about the time Coleman’s car got blocked in and he picked it up and moved it by hand.
After marrying June Miller in 1939—Coleman said he landed in her lap in Madison Square Garden when he was thrown from the ring—he moved to Forest Hills. Miller died 17 years ago.
Following his retirement from wrestling, Coleman worked for the New York State Motor Vehicles Department inspecting license plates and as a wrestling judge.
More recently, he could be seen at the Forest Hills OTB on Queens Boulevard, smoking cigars with friends, playing cards at the synagogue or at the T-Bone diner, where he ate most of his meals.
At Meadow Park Rehabilitation, he watches sports on television, including wrestling, and still smokes cigars, when he can. The recent past has become more difficult for him to remember than stories from his prime. “I can’t remember what I ate today,” he recently said to his niece. “But I remember everything about the past.”
Mr. Coleman passed away earlier this year...Zichrono Livracha
Posted by DrMom at 6:07 PM