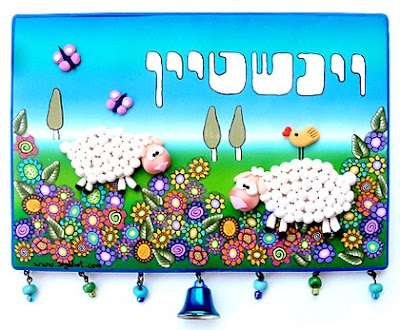 Sagit is yet another super-talented polymer clay artist from Israel. Today we see door a sign (complete with bell) for an Israeli family. Sagit clamis to love color... you think? Ilil Ziv may be the Israeli Mistress of Sheep (and figurines) as you can see by this adorable trio below.

Two feasts in the parsha of Vayetze sandwich Jacob's two-decade long sojourn in Aram (today called Syria). The first meal -- "Laban gathered together all the men of the place, and made a feast (Genesis 29:22)" -- was held to mark Jacob's wedding. Twenty years later, the occasion -- "Jacob offered a sacrifice in the mountain, and called his kinsmen to eat bread (31:54)" -- entailed Jacob's spontaneous ceremony upon his exit. To be sure, no record exists of what was on either menu besides bread, which is also used in Hebrew as a generic term for food. Nevertheless, we can safely assume that lamb, in light of its recurrent presence in the parsha, was featured on both occasions.

Sheep are practically omnipresent in Vayetze. There are white sheep and dark sheep and speckled sheep and spotted sheep and sheep as salary and even dreams about sheep (31:11-12). Jacob's first sight of Charan was "a well in the field, and lo three flocks of sheep there next to it (29:1)." (According to Ramban, "The well alludes to the Temple, and the three flocks of sheep to the three Pilgrimage Festivals.") Then his future wife arrived with more sheep, "Rachel came with her father's sheep; for she tended them (29:9)." In reverse of Eliezer's meeting with Rebecca at the well, here Jacob "watered the flock of Laban his uncle (29:10)." That uncle promised Rachel as Jacob's wife in return for seven years of shepherd duty, which proceeded with Leah being substituted for Rachel and eventually the term of work extended to twenty years. The majority of chapter 30 involves the husbandry details of Jacob's employment. At the end of the parsha after two decades of being away from his parents' home, Jacob took his own flocks and departed while "Laban was gone to shear his sheep (31:19)." In the midst of all these sheep, the Torah recounts the birth of eleven of Jacob's sons. Thus, the Jewish people literally develop amongst sheep.

Sheep, docile and easily lead, became among the very first domesticated animals. Since these ruminants thrive in dry climates and mountainous terrain, they suited mankind's early nomadic lifestyle, particularly the environs of the Middle East and Mediterranean. Even after the advent of agricultural societies, these hardy animals continued to provide an invaluable source of meat (Isaiah 53:7), milk (Deuteronomy 32:14), leather (Exodus 25:5), and wool (Hosea 2:7). Thus the Torah established that if someone stole a sheep, thereby seriously effecting the victim's livelihood, he must pay back "four sheep for a sheep (Exodus 21:37)."

The pervasiveness of sheep in this parsha reflects their essential role in the life of the Israelites throughout the biblical period. Judaism has always held sheep in special regard and this intrinsic connection with the lamb is prevalent throughout Jewish lore and liturgy. A host of biblical figures, including Abraham, Isaac, Jacob, Moses, and David, were shepherds, and the Torah is filled with related references, such as "The Lord is my shepherd (Psalms 23:1)." As an element in the Exodus story, lamb plays an important role in Passover festivities and remains a traditional main course at many Sephardic Seders. Sounding the shofar (ram's horn) serves as the central Rosh Hashanah rite. In some homes, the head of a lamb is displayed on the Rosh Hashanah table, signifying the hope that in the coming year we will be the "rosh (head) and not the tail" (the reverse of Deuteronomy 28:44) and a reminder of the ram substituted for Isaac as a sacrifice (Genesis 22:13). Torah scrolls and mezuzot are generally written on sheepskin parchment. The conclusion of this d'var from Gil Marks can be found here.
Posted by DrMom at 3:08 PM