From Shacking up to Blessed Union 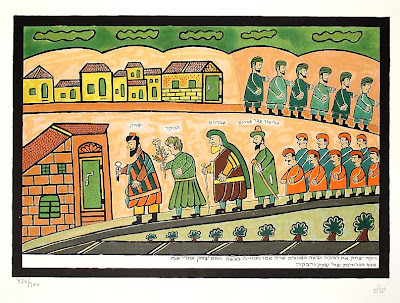 This print is from the late artist Shalom of Safed or Shalom Moskovitz. We see Isaac holding a key leads his new wife Rebecca to their home. They are followed by Abraham, Eliezer and an entourage of followers. Note that while the male figures are dressed in some facsimile of eastern garb, Rebecca could have stepped out directly from the shtetl. The row of olive trees at the painting's bottom represents the couple's future children and their legacy of longevity and fecundity. Today's posting is from Holly J. Lebowitz. She discusses on making her home, a Jewish home and her marriage, a Jewish one.

I was in a taxicab the other day, and somehow it came up that I was a newlywed. The driver got very excited and launched into an impassioned monologue about how wonderful marriage is. His broken English put it simply:
"If you're not married, you're bad."

Well, I responded when he paused, it's not that you're bad if you're not married; it's just that your life is different.

In a way, this was a surprising answer from me, since I'd dated my now-husband for seven years and lived with him for two before we married last October. The door we walked through as newlyweds led into the same home that it had led into when we were just boyfriend-girlfriend, we kept our jobs, and professionally I've kept my name.

But what we've discovered is that the things that change between a two people when they get married are ineffable. Inadequately put, changes include the tiny thrill of referring to "my husband," the look of joyful amazement that we shared on our wedding day, the things we say to each other as we fall asleep.

The physical trappings of our life together, and much of the emotional content of our relationship, were things that we didn't want to change--this was precisely why we'd decided to get married. We looked to our wedding day as a celebration of our love as it was.

But as we planned our ceremony and reception, we wondered, how could we imbue separateness into something that we wanted to celebrate?


The last place we'd expected to find an answer was in traditional Judaism. What we found, oddly for our unobservant Reform selves, was that the traditional elements of a Jewish wedding ceremony are rich with ways of celebrating invisible changes.


Mikveh: Purifying Waters
The first thing I did was decide to visit the mikveh, or ritual bath, before the wedding. In preparation, I spent a few afternoons with the "mikveh lady," who instructed me in the Jewish laws of family purity and encouraged me to make mikveh a regular part of our marriage.
In the course of our discussions, she said, "You spend the time that you're dating putting bricks together, building the foundation of your relationship." For me, that was seven years' worth of bricks, with all the accompanying struggles and triumphs. When you marry, though, she said, "then you put in the mortar to hold the bricks together. Without the mortar, all you have is a pile of bricks. Which is fine, but it's not a permanent, sturdy home."
Slipping beneath the waters of the ritual bath, warm and scrubbed clean, I felt the beginnings of a separation--that there was a before period and soon there would be an after period. I was about to become married.

Havdalah: Sweet Separation
Our wedding was on a Saturday night, the end of the Jewish Sabbath. In a small room before the ceremony, we held a brief service in which we essentially got married. The larger ceremony would be a public affirmation of what we'd just committed to.
Before we could proceed, though, we had to separate the Sabbath, which ends at sunset, from the rest of the week. This is done through a ceremony called havdalah, in which a three-wicked candle is lit and a bag of spices is passed around to smell. The rabbi pointed out that just as we were separating the Sabbath from the rest of the week, we were separating single life from married life. The scent of sweet spices lingered, a reminder of what we'd just left.

Veiling: Bridal Transformation
After we signed the ketubah, or marriage contract, the groom placed the veil over my face. This tradition is rooted in Genesis--in which Jacob married the wrong sister because she was veiled before their wedding. It was at the moment when Rob lowered the veil over me--not when I put on my bridal gown, or saw Rob for the first time, or even signed the ketubah--that I felt transformed into a bride. Looking at my dearest friends and family through the hazy gauze of my veil completed my internal bridal picture.

Circling: A Nascent Family
At the beginning of the ceremony, the bride traditionally circles the groom seven times, a mystical number. This signifies many things, among which is the fact that the couple is now their own family, separate from--though obviously still connected to--the families that reared them. Rob and I decided that we'd circle each other three times, equalizing this spiritual creation of our new family. Of course I had loved Rob for many years, but not until that moment was he my family, nor was I his.

Chuppah: An Open Home
A Jewish couple publicly celebrates their marriage under a chuppah--a canopy that's open on all four sides but covered on top. Many couples have outdoor weddings with a chuppah made of a prayer shawl. Ours was draped in light fabric and ribbons of flowers. The rabbi explained that the chuppah is a symbol of the Jewish home--it's permeable, open on all sides to the joys and travails of life, but we're protected by its roof.

For us, it seemed the perfect symbol. We already had a home, had shared one for two years, but the act of getting married elevated our home to a new, sanctified plane. Sealed with mortar. Different.
Posted by DrMom at 1:27 PM