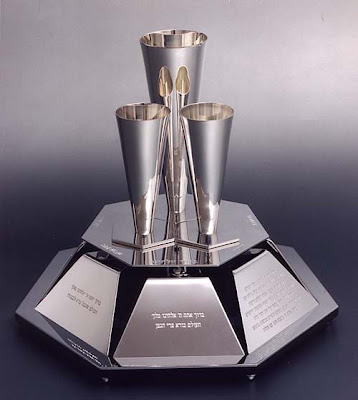 An integral part of the Jewish wedding ceremony is the recitation of the sheva brachot, the seven blessings. The artist Dan Givon says of his Seven blessings Kiddush set and of his work in general, "My art is an expression of my Jewish identity. When designing Judaic Art, it is essential to understand its spiritual purpose as well as its functional use. Each work balances modern designs with tradition and function. Through these pieces, I strive to show today's generation that modern Judaica is art as well as a harmonious part of our modern lifestyles."


The marriage of Rebekah and Isaac is the first love story we encounter in the Torah. We have read about many married couples previously, but never before have we witnessed their first meeting or encountered the word “love,” as we do in Genesis 24:67 in reference to Isaac’s feelings for Rebekah.

The story of Isaac and Rebekah teaches us that there are many different reasons why a couple may get married. Some people marry for love, others because of financial concerns, and still others for political reasons or a desire to raise their social status.

In this instance, Abraham’s only concern is that his daughter-in-law comes from the land of his birth. Once a bride has been found for Isaac, Abraham seems to feel that his job is finished and he is free to take on a new wife, Keturah, after Sarah’s death. The text never tells us if Abraham even met Rebekah: His only desire was to ensure the status of his progeny as Hebrews.

Abraham’s unnamed servant (assumed to be Eliezer, who is mentioned in Genesis 15:2) is more concerned with finding a suitable mate for Isaac. Eliezer is wise enough to pray to God for guidance and hopes to find a woman who is beautiful both inside and out. Rebekah’s outward beauty is immediately evident, and her inward beauty manifests itself in her kindness and generosity at the well.

What was Rebekah’s motivation for agreeing to marry Isaac and leave her ancestral home? Some of our Sages suggest that she was living in a “house of scoundrels” and saw an opportunity to escape to a life that involved contact with more righteous people. But it is clear that when she sees Isaac for the first time, he sparks her interest: “Who is that man walking in the field toward us?” she asks the servant (Genesis 24:65). Obviously there was something about Isaac that was worth noticing.

The motivation for Isaac’s falling in love was the desire to alleviate the loneliness and sense of loss he experienced as a result of the death of his mother. The text tells us that “Isaac loved her [Rebekah] and thus found comfort after his mother’s death” (Genesis 24:67).

What lay ahead in the marriage of Isaac and Rebekah? Some may argue that they lived a happy life, while others would conclude that theirs was a marriage fraught with deception and misunderstanding. If Rebekah married Isaac in order to escape a difficult family life and Isaac married Rebekah in order to have someone to comfort him after the loss of his mother, what were the chances of their marriage being successful?

Sometimes when two people enter into a marriage with very different objectives, each of them can still derive satisfaction from their union. May God grant us the wisdom to choose spouses whose beauty delights us in many ways and whose motivations for marriage are in harmony with our own. (Rabbi Peter Kessler at URJ.org)
Posted by DrMom at 1:36 PM