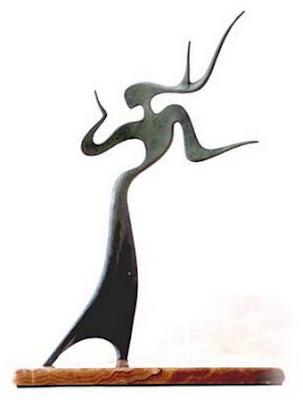 Victor Halvani was born into a traditional Jewish family. His father Isaac and especially his mother Bela, daughter of Rabbi Yanney, inspired in him the beauty and spirituality reflected in his Biblical sculptures. Since 1953, Victor Halvani has been creating major art projects in the USA and Israel. His large outdoor bronze sculptures are displayed in public places throughout the world. This is his "Lot's Wife." The multitalented yet rather bizarre Wilf Lunn chose to sculpt the pepper and salt shaker pair below in the image of Lot and Lot's wife (the pillar of salt)

A Summary of Genesis 18:1-22:24 from the House of Hillel : Having just received his brit mila, and currently in the most painful stage of recovery, Avraham is visited by Hashem, as a gesture of bikur cholim. Seeing that Avraham is upset that n o guests are coming to visit him, Hashem sends three angels in the guise of men to visit Avraham. After Avraham and Yishmael serve them a meal, one of the three visitors tells Avraham and Sarah about the future birth of Yitzchak. Sarah, though she later denies it, responds, as Avraham previously had, by laughing at this seemingly ridiculous news.

The men then leave, and two of them head towards S’dom to bring its final doom. However, before giving the go-ahead for the final destruction of S’dom, Hashem gives Avraham a chance to bargain for the survival of the cities. He reasons that now that Avraham is the father of all nations, it would be improper to destroy "his" children without first consulting him. Avraham tries to find a merit by which the cities might be saved, concerned mainly with the fact that a wholesale d estruction of a metropolitan region would cause others to view Hashem as a destructive God. After an extensive debate, no merit was found, and Avraham consented that the cities had to be destroyed.

Meanwhile, the two angels had arrived at Lot's house. When word spread that Lot had allowed guests into his house, it was surrounded by the people of S’dom, who demanded that the guests be turned over to their custody. Lot offered his daughters instead, at which point the angels intercede, blinding the populace. They then told Lot to take who and what he could, and flee the city. Lot delayed, wanting to save as many of his possessions as possible. The angels were finally forced to ca rry him out of the city. In flight to the mountains, Lot's wife looked back at her destroyed home, in defiance of a direct order from the angels, and is summarily turned into a pillar of salt. Thinking themselves to be the only people left in the world, Lot's daughters intoxicate and sleep with their father, giving birth to the forebears of Moav and Ammon.
. 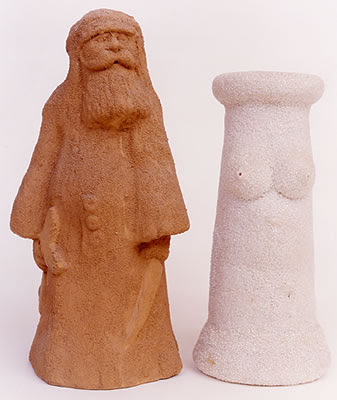 Avraham and Sarah then travel to G’rar, where Sarah is taken by the king, Avimelech. Hashem prevents Avimelech from having relations with Sarah. He instructs Avimelech to return Sarah to Avraham, which Avimelech does, sending the marri ed couple away with many gifts.

Yitzchak is then born, an event that caused much happiness for both of the new parents, who had reaped the benefits of Hashem's mercy on that day. As Yitzchak grew, Sarah saw a looming threat in Yishmael, who was slipping into a more e vil culture. Thus, she ordered Avraham to throw Hagar and Yishmael out of the house. Exiled into the desert, Yishmael became very sick. Then Hagar prayed to Hashem to keep her son alive. Yishmael survived, and Hagar got him a wife from her homeland of Egypt.

Avimelech comes briefly back into the story to make a treaty with Avraham that their descendants shall not antagonize each other, a pact sealed at Be'er Sheva.

The parsha ends with the tenth and final trial of Avraham; Hashem commands him to offer Yitzchak as a sacrifice. Avraham complies with the same zeal with which he had always performed the requests of Hashem. Yitzchak, upon learning what was to happen, also complies wholeheartedly. As Avraham prepared to slaughter his son, an angel called out to him, telling him to stop. The angel explained that Avraham had already proven himself, and need proceed no further. Avraham found a ram nearby , and slaughtered it in place of Yitzchak. Avraham returned home, where he was informed of the birth of Rivka, the future wife of Yitzchak, who some commentaries explain had gone to learn in yeshivat Shem v’Eiver.
Posted by DrMom at 11:12 AM