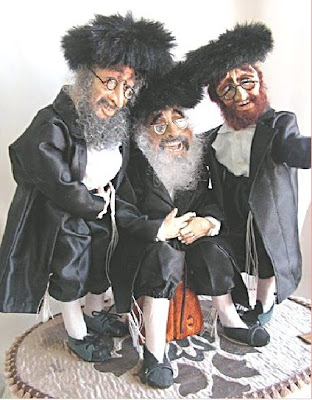 Magda Watts is a dollmaker... but to call her that would belittle the exuisite nature of her work. While she is not the Creator, she certainly has been endowed with special talents from G'd. Not only is she a dollmaker, but she is a survivor: her art career began in Auschwitz. She is the subject of a documentary for PBS. Magda works with fabric and polymer clay.

From Bereishit 12:1 - 17:27
God tells Abram to go forth from his home in Haran to a land that God would show him. There God will make him into a great nation. Those who bless him will be blessed and those who curse him will be cursed. Abram travels with his wife Sarai, his nephew Lot, and their entire household. When they arrive in Canaan, Abram travels throughout the country, pitching his tent and building altars to God.

A famine strikes the land of Canaan, and Abram travels to Egypt. There he pretends that Sarai is his sister so that the Egyptians will not harm him. Only after Pharaoh takes Sarai into his tent is the truth revealed -- that Sarai is Abram's wife. (This theme, calling the wife a sister, will be repeated twice more in Genesis.) Abram leaves Egypt a wealthy man.

Abram and Lot separate because their flocks become too large to pasture together. Lot goes to live in the city of Sodom, a place known for selfishness and cruelty. A war breaks out between various kings, including the king of Sodom, and Lot is taken captive. Abram must become a soldier, rescuing Lot and then refusing any financial reward for his service.

Abram has a powerful vision of a covenant between God and Abram's descendents. He learns that his people will be slaves in a foreign land for four hundred years, and then come forth to reclaim their homeland. Unable to have children, Abram and Sarai turn to her handmaiden Hagar as a surrogate. Hagar gives birth to a son, Ishmael. God again reaffirms the covenant, changing Abram's name to Abraham and Sarai's name to Sarah. Circumcision is the symbol of the covenant. Every male born into Abraham's household must be circumcised on the eighth day. At the age of ninety nine, Abraham circumcises his own foreskin.
Posted by DrMom at 3:30 PM