It's a sweetness in the belly 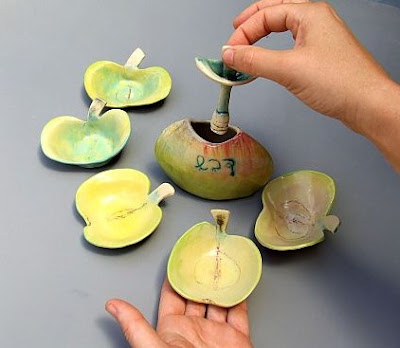 Apples and honey bring us the promise of a wonderful new year.
SHARON MELNICER
We're all familiar with the Jewish custom of dipping an apple into honey and eating it on the night of Rosh Hashanah. So why the apple? Is not placing honey on the piece of challah with which we begin the meal sufficient to symbolize a sweet year? What is the special symbolism of the apple that makes it the fruit that most graces our Rosh Hashanah table?

One of the fruits to which the Jewish people are compared in Solomon's Song of Songs is the apple: "As the apple is rare and unique among the trees of the forest, so is my beloved – Israel – among the maidens [nations] of the world."

The Torah scholar and writer, Rabbi Berel Wein, refers to the Midrash in order to explain why the apple is so significant on Rosh Hashanah.

"The apple tree puts forth the nub of its fruit, even before the leaves that will surround and protect the little fruit at its beginning stage of growth, are fully sprouting," he has written. "The Jewish people, by accepting the Torah with the statement that we will do and we will understand, place holy action and observance of Torah commandments before understanding and rational acceptance. It thereby imitates the behavior of the apple. It is thus that the apple became a Jewish symbol, a memory aid, so to speak, to the moment of revelation at Sinai."

The apple is significant for another reason. Wein states that it also serves to remind the Jewish people of their enslavement in Egypt and their deliverance from that bondage. "Again, according to midrash," he said, "the apple served as the fruit of affection between husband and wife during the long and painful period of abject slavery. It provided them with hope for the future and the determination to bring a future generation into the world, despite all of the bleakness of Jewish circumstance."

The apple, therefore, also became the symbol of the Jewish home and family, of optimism for a brighter Jewish future, of the tenacity of Jewish spirit and determination.

Another favorite food staple in the Jewish home during the High Holy Day season is honey. Traditionally, from Rosh Hashanah until after Sukkot, honey is served with every major meal. It is smeared on the bread over which we recite the Hamotzi blessing, the sweet apple is dipped into honey on the night of Rosh Hashanah, sweet baked goods are made with honey and honey is used in the preparation of foods such as glazed carrots and sweet desserts.

The tradition of honey on the Jewish table during the High Holy Day period is an ancient and universal Jewish custom. It is already recorded in the works of the Babylonian Geonim in the seventh century and probably dates back to even much earlier times. It is no exaggeration to say that Jews have always seemed to possess a sweet tooth.

The obvious reason for the use of honey on our table at this time of the year is the symbolism of our desire for a "sweet new year." According to the Unabridged Oxford Dictionary, "sweet" has many meanings: dear, precious, enjoyable, satisfying, serene, secure and something most pleasing. Well, that about sums up our hopes and prayers for the year and, therefore, honey serves as our representative in expressing these fervent hopes and prayers.

Wein points to the deeper symbolism of honey. "Honey," he said, "represents more than sweetness per se – it is one of the attributes of the land of Israel, which is described in the Bible as being a land that flows with milk and honey. Thus, honey on the table always reminds the Jews, wherever they reside, of their ancient homeland of Israel and of the Jewish attachment to its history and holy soil."

Actually, the honey referred to in the land flowing "with milk and honey" is not the common bee honey that we use today, but rather describes the honey of biblical times that was primarily produced from overripe dates. Even in Israel today, date honey is produced and sold, though the overwhelming majority of honey on the market comes from bees. The use of bee honey as a permissible kosher food raises an interesting halachic question.

The general rule is that food products that are derived from non-kosher creatures are never considered to be kosher for Jewish use as a food. Bees are a non-kosher species of insect life and, therefore, one would think that the honey that they produce within the sacs of their bodies would also not be kosher. Yet we find in the Bible that bee honey was eaten without compunction.

Wein's interesting and unusual response is to ask, "Why is honey different from, say, milk from a camel that remains non-kosher, since the camel itself which gave the milk is a non-kosher animal? The rabbis of the Talmud studied the problem and decided that the sac in the bee that contains the honey is halachically considered to be only a storage place of the honey, and neither it nor the honey produced are an integral part of the bee's body."

The eating of apples in honey on Rosh Hashanah is certainly one of the more enjoyable customs of Jewish tradition. To use Wein's words, "May this symbolism of sweetness truly be a harbinger of delight for the good year for us all."

For more than 30 years Dina Blich has been involved with many different art forms- painting, sculpting, decoration design, video art, performance, photography, ceramics and teaching. From the mid 90s she has been dedicating most of her time to ceramic art, including the Judaic-themed designs of sculptural ceramics like this apple and honey set.
Posted by DrMom at 11:29 AM