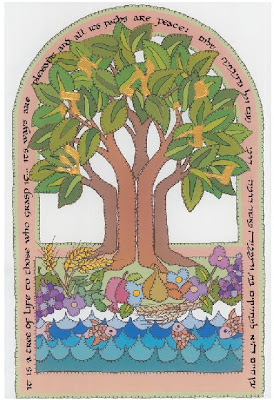 Fish is prominent on the holiday table, especially on the New Year and Shavuot. In Jewish lore, it is a symbol of fertility, because Jacob gave his children a blessing that they should multiply like fish in the sea. It is also associated with the coming of the Messiah; according to a legend, the Messiah will come in the form of a great fish from the sea.

The custom of eating fish on the Sabbath is apparently an early one, as the rabbis of the Mishnah (oral law, codified approx. 200 CE) ruled that it was meritorious to eat fish with each of the Sabbath meals; references in the Talmud also indicate that it was customary among Jews to eat fish on Friday night.
In the Ashkenazi kitchen

East European Jews acquired a liking for freshwater fish from the hundreds of rivers which crossed the mainly landlocked areas they inhabited. In the shtetl, fish was brought live on Thursday. It was swimming in tubs at the market and was kept swimming in the bath till Friday, with several changes of water to get rid of the muddy taste; on Friday morning it was killed with a knife or a hammer blow.

Carp, pike, perch, sterlet and trout were all grand fish. Édouard de Pomiane, the French gastronome of Polish origin who wrote about the cooking of the Jews of Poland, remarked that "every observant Jew eats river fish. The wealthy buy carp and pike. The poor content themselves with a miserable roach or sometimes a piece of salt herring." (The poor also ate tench and chub.) Jewish traders on the silk route were involved in introducing carp from China to Central and Eastern Europe in the seventeenth century, and it was Jews who first farmed carp in Poland. They managed fish ponds and also bred fish from the Black, Azov, and Caspian Seas and from the river Don. It was the carp, which traveled easily live in tanks, that they adopted as their fish. Whereas carp became a symbol of the Sabbath, salt herring, which Jewish merchants also traded and which was a lot cheaper than fresh fish, was the symbol of the weekday and marked the contrast between the two.

Many of the old recipes for freshwater fish and herring are now used for saltwater fish like halibut, haddock, cod, plaice, sole, hake, flounder, and salmon. Salmon has become the great Jewish party dish, ever-present at weddings and bar mitzvahs. At my local fishmonger, Corney's, which specializes in salmon, both wild and farmed, there are always long queues of people waiting to have theirs filleted or cut into steaks for the Sabbath. For more of this essay and for some recipes go here.


Rebecca Shore manages to combine our two themes this week into one piece of art. The Tree of Life, symbolic of torah is filled with letters from God's name. They are embedded in the branches of the tree, embossed in gold. We also find the seven species- figs, olive, wheat, barley, grapes, pomegranates, and dates. Below fish swim, they as the sole survivors of "the flood" remain a talisman of good luck to the Jewish people.
Posted by DrMom at 1:56 PM

Well the New Year's card is finished and posted to my blog. Please be aware that I am totally an amateur artist. The card is simple as are most of mine, but a lot of thought went into it and there is a lot of meaning behind this for my hubby and myself.