The Art of Giving... 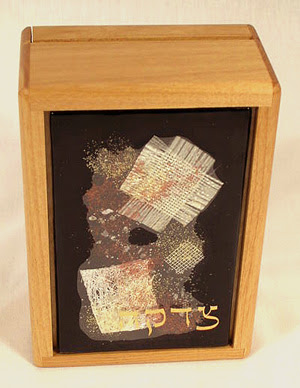 At a time when 90 percent of donations are made by the solitary act of writing out a check, tzedakah boxes are enjoying an unexpected renaissance. The simple box that embodies one of Judaism's foundational tenets—the commandment to help those in need—has blossomed in the hands of contemporary Judaica artists. This modest denizen of bubbe's kitchen is now wrought in a multitude of shapes, sizes, media, and methods and has become an object as beautiful as the mitzvah that inspires it.

The strong link between tzedakah and the home is the inspiration for Leona Fein's unique stained-glass tzedakah boxes. "Giving tzedakah is part of my family's heritage," she says. "My uncle gave to an old-age home for rabbis—The House of Sages on Manhattan's East Side. That is still my charity, and when I began to design tzedakah boxes, I wanted them to have the shape of a house because tzedakah should start at home."

What distinguishes Fein's work is not only her skill with stained and leaded glass but her reinvigoration of the art form called "potichomania." Popular in mid-19th-century England, potichomania is a technique whereby pictures and brightly colored pieces of paper are adhered to the underside of clear glass. Fein has spent a lifetime collecting Jewish manuscripts and incorporates facsimiles of portions of them into each of her Judaica pieces.

Her multicolored cheder tzedakah box features potichomania from a 1396 German manuscript showing a student copying onto a slate Hillel's enduring maxim "Whatever is hateful unto thee do it not unto thy fellow." Fein also makes seven pyramid tzedakah boxes that are popular gifts to mark a bar or bat mitzvah, the arrival of a new baby, or other occasions.

Sara Beames reached back 4,000 years for the technique of glass fusing that she uses to make her tzedakah boxes and other pieces. She cuts sheets of art glass and works them into a design. The assembled glass is then fired in a kiln at 1,400 degrees Fahrenheit, during which the individual pieces melt together, or fuse, giving birth to stunning works that have the excitement and surprise of a kaleidoscope.

Beames already had a loyal following, who snapped up her picture frames and other home accessories at shows in the New York area, when a Jewish customer asked her if she could make a Seder plate. Soon, Beames was creating menorahs, mezuzahs, candlesticks, and Seder and challah plates that were selling nearly as soon as they cooled from the kiln.

When a customer asked Beames for a tzedakah box, however, she faced a new challenge: how to translate the basically flat fused glass to the three dimensions of a tzedakah box. Eventually she found two artists—a metalsmith and a woodworker—to construct boxes to her specifications. Beames affixes her signature fused-glass panels to the surfaces of the boxes.

Creating Judaica has given Beames the opportunity not only to reconnect with Judaism but to learn and teach others as well. "I had a good [Jewish] education, but there were a lot of nuances I didn't know about Jewish ritual objects," she recalls. "Some of the shop owners who carry my work aren't Jewish, and I started giving them information." On her promotional material, Beames includes the history and purpose of each ritual object. Printed next to photographs of her tzedakah boxes is this text: "Tzedakah is the act of giving to others. It literally means 'righteousness' and is one of the basic precepts of Judaism. By giving to others we enrich our own lives." Read more here.
Posted by DrMom at 6:52 PM