A Woman to Celebrate 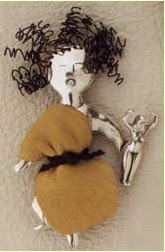 Rachel the Matriarch - Rachel has become associated with the 17th of Tammuz and Tisha B'Av because of an often-cited Midrash. The Midrash comments on Jeremiah's prophecy which says: "A cry is heard in Ramah - wailing, bitter weeping - Rachel weeping for her children. She refuses to be comforted for her children who are gone" (Jeremiah 31:14). The Midrash wonders why Rachel is buried in Bethlehem when all of the other patriarchs and matriarchs are buried in the Cave of Machpela in Hebron. The Midrash explains that as the Jews were being exiled after the destruction of the first Temple, all of the matriarchs and patriarchs petitioned God that the exile should not be permanent, but none of them succeeded. Rachel then argued that when she was set to marry Jacob, her father Lavan plotted to switch her with her sister Leah. Rachel could have sabotaged the plan but chose not to so as not to embarrass her sister. God agreed that the exile would not be permanent because of Rachel's unselfish act.

Nomi Green, jeweler writes this about her Rachel pendant made of sterling silver and mixed media. "She who loves all manifestations of holiness on Earth. She places love for her sister above all else. Patient and calm in her own desire, she may grow forceful in the face of possible harm toward others."

Shabbat Shalom.
Posted by DrMom at 7:17 AM