If Deborah is the prophet of war, and Jeremiah is the prophet of exile, Miriam is the prophet of water. Almost from the first moment we see her, she's next to the water, watching her brother's cradle to safety along the Nile. She knows the power of water to bring life and death. So it's appropriate that here in her Song of the Sea she sings of God's use of the waterpower. As the very next lines show (Ex 15.22-27), Moses himself doesn't know so much about water, but brings the people to a place of bitter waters, Marah, which precipitates the first stirrings of rebellion. He must appeal to God for help, who exacts a promise from the people to obey God's statutes in return for leading them to fresh water. In the desert, water is politics.

Tradition has it that Miriam secured the Israelites against future such occurences by her magic well of water. I prefer to think of it this way: her brother, Moses, is good at the flashy miracle--raise the rod, etc.--but Miriam's unique ability is to listen attentively and patiently to the earth's processes and find the sources of life deep in the aquifers below. When Moses wants to turn back a rebellion by Korach, God helps him by opening up the ground--but that sort of miracle won't work when it comes to the waterpower: the sources would be clogged by the violence of the collapsing earth. Moses doesn't want to speak to the rock to get water, even after God promises him 3 separate times that speaking to it will produce water. Instead, he beats it with his rod--the rod that turns the Nile to blood, the rod of war, the rod of a certain kind of masculine authority.

Miriam knows the secret of speaking to the rock; she knows the secret of dialogue rather than the exercise of autocratic authority. Moses' impatience and reliance on divine authority and power is vital to the success of his mission. Community-organizer, institution-builder, mover of a slave people to freedom--with a little coercion when necessary. Miriam's power of dialogue is no less vital to the success of her mission: that is, to get close to the pure sources of life. 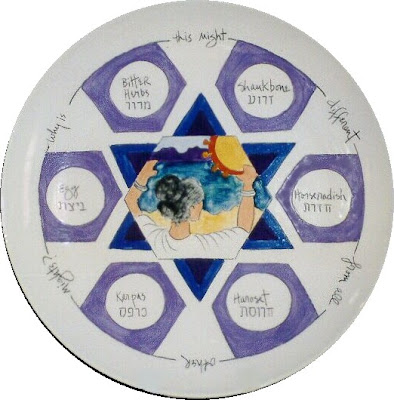 It's no wonder that the people will not stir from Hazeroth until Miriam, punished by God for questioning Moses' authority, is readmitted to camp: the sources of life might dry up if not for her! (Num. 11). Neither is it any wonder that when Miriam dies in Kadesh (in about 1452 BCE) the Torah reports: "Miriam died there and was buried there. The community was without water, and they joined against Moses and Aaron." In this second water-related political crisis in the community, neither the political leader (Moses) nor the priestly leader (Aaron) knows how to respond appropriately. It's in this crisis that Moses disobeys God, raises the rod, and disregards the command to speak to the rock--for which he is condemned never to enter the Land.

Miriam is indeed a prophet: the prophet who knows that the process by which one gets near to the "fountain of living waters" is as important as the nearness itself. She models a type of relationship that is based on listening and respect. For sometimes, though one has the best intentions, the very impatience by which one attempts to construct holy relationships can poison one's own life, and produce such bitterness that it poisons the lives of subsequent generations. (from Anton Marks)

To learn more about Miriam, the prophetess check this out.


Judy Miller combines humor and talent to make this Miriam seder and matzah plate combination as well as her Miriam's cup, which has become a part of so many seder tables. Judy began making ceramics as a young art student in need of money. Thankfully, what she found was her niche!
Posted by DrMom at 4:34 AM

Hi, Added a new value add to my blog this weekend - a news widget from www.widgetmate.com. I always wanted to show latest news for my keywords in my sidebar. It was very easy with this widget. Just a small copy paste and it was done. Great indeed.