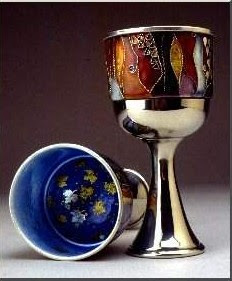 The following was written by the poet, I. Halpern who lives and writes in Central Islip, New York. Mr. Halpern records books for the New York Braille Institute World Library for the Blind and Seeing-Impaired. He presents his own poetry and conducts workshops for Poetry in the Schools and National P.E.N. Writers in Prison.

what is the "Order" for us?
four glasses of grape juice, some matzohs, bitter herbs
would this make us free?
to climb over mountains
get away from these locked narrow confines 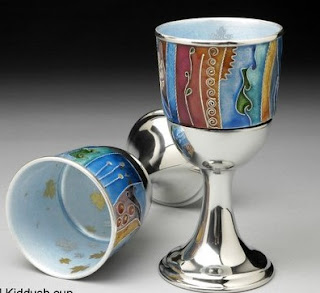 Marian Slepian IS a silversmith and Cloisonne enamilist of world reknown. From her work, it is easy to see why she is so respected. And remember- be careful drinking those four cups of wine!

For more about doing work with Jewish prisoners, look here or here.
Posted by DrMom at 10:13 AM

Thank you for showing some of my work; but I am not a "was"; happily, I am still an "is".
Marian Slepian
slepian@msn.com