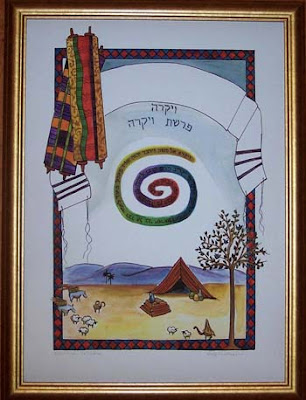 In this parsha G'd instructs the following regarding animal sacrifices:
God instructs Moses on the five different kinds of sacrifices that were to be offered in the sanctuary:
1. The olah or "burnt offering" was a voluntary sacrifice that had a high degree of sanctity and was regarded as the "standard" offering. The entire animal, except for its hide, was burned on the altar. (Leviticus 1:1-17)
2. The minchah or "meal offering" was a sacrifice made of flour, oil, salt, and frankincense that was partly burned on the altar and partly given to the priests to eat. (Leviticus 2:1-16)
3. The zevach sh'lamim or "sacrifice of well-being" was a voluntary animal offering from one's herd, sometimes brought to fulfill a vow. (Leviticus 3:1-17)
4. The chatat or "sin offering" was an obligatory sacrifice that was offered to expiate unintentional sins. This offering differs from the others in the special treatment of the blood of the animal. (Leviticus 4:1-5:13)
5. The asham or "penalty offering" was an obligatory sacrifice of a ram that was required chiefly of one who had misappropriated property. (Leviticus 5:1-26)
As we prepare for Passover, here is a discussion on how this holiday relates to sacrifice.

For over 25 years, Suzy Friedman of Pickwick Arts has used various media to express her spirituality and to celebrate Jewish life. She’s an Indianapolis-based artist who earned a B.A. from Indiana University and an M.A.E. from Herron School of Art at Indiana University. Above she shares her vision of this week's torah portion.
Posted by DrMom at 12:41 PM