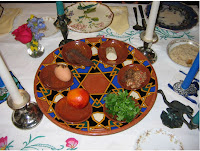 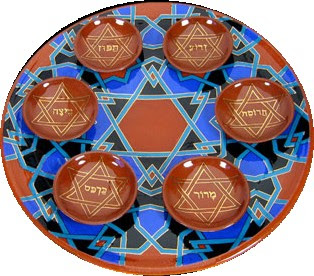 I offer a range of Seder plates to accommodate your Passover, as well as a modern alternative set for a more inclusive celebration. I make Seder sets in two different patterns, so the first step is to choose which design you want and in which colors. Click on any of the images below for an enlargement of that pattern and a price. Then choose whether you need 6 or 7 Seder minis from the link below. The images at the top of this page are also clickable. For an exciting action photo of our eco-feminist Seder plate in use at my sister's home look to the above left.

Seder plates are used in the celebration of Passover by the Jews, which we have been observing for the past three thousand years. Every year we commemorate the flight of our ancestors from slavery in Egypt and our birth as a free people in the desert. We use the Seder plate to help us tell the story of Passover and there are special places for symbolic items.

While yesterday's seder plates from Shagra Landesman and today's from Paul Barchilon are traditional, the former have more of a modern coolness as a result of their being aluminum. The colors of the glazes on Barchilon's ceramics exude a warmth. I also love the geometric designs reminiscent of the mandala. The Israeli artist Ofira Oriel features the Star of David in her mandala paintings. 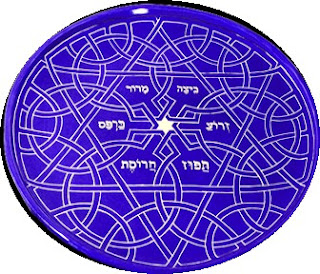 Margaret Starbird wrote the following about the Star of David as mandala in her book The Woman with the Alabaster Jar (very much NOT a Jewish text). As an archetypal symbol for the sacred union of the opposite energies, it (the Star of David) is the yin-yang of western civilization. Formed by the intertwining of the fire and water triangles (the male blade and the female chalice) this symbol represents the masculine and feminine principles in perfect union, the sacred marriage or hieros gamous of the ancient world....The message of the Star of David in the heavens is undoubtedly peace on earth. But it is more than that. It is a reminder that we are not alone--that we are part of a whole and that the Living Force of the Cosmos is with us. Equality, mutuality, community and wisdom are all summed up in this beautiful mandala whose ultimate archetypal meaning is harmony in diversity. 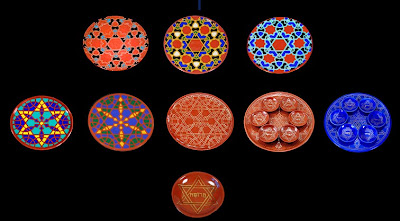