You can go home again.

Last week, I had the opportunity to attend the 45th reunion of the URJ Kutz Camp in Warwick NY. I had been there many times as a youth grouper and worked there the Summers of 1982-1984. I want to share my thoughts of that weekend with you... as well as a beautiful spice container from the Israeli artist Gregory Ruvinsky. 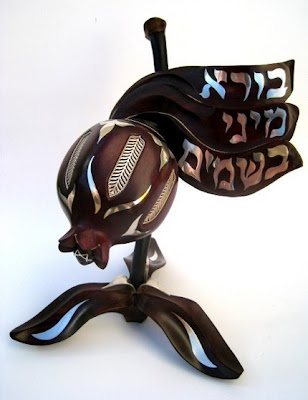 As the distance between me and the Kutz (rhymes with boots) Camp widened, I found myself rather reflective and contemplative. I had a realization that for the first time I left that remarkable place without crying and for those of you who remember my tears and sobs that is an amazing fete.

I considered why I was not crying. I think there were many factors involved. I left camp with a sense of hope. While enjoying the Dan Nichols concert from the comfort of my seat, I watched the next generation of reform Jewish leaders dance and sing to the music which will further transform the reform movement. These kids exuded a dedication to the movement that was palpable. While the recent political climate in Israel had me questioning whether or not we would survive, I left Bowen Road with a sense of hope and a premonition that Reform Judaism will thrive in the coming years.

The sounds of music and prayer filled the tayatron during song session and teffilah. I prayed as I had not prayed in nearly 30 years. My frustration is now that I seek to find a temple which will offer me the kavanah that was bountiful this weekend.

If I were to illustrate my life, I think I would draw a set of stairs with Kutz being the first step. Kutz- the people who populated and influenced that sacred 88 acres- allowed me to become the me I was meant to be- content with my past, pleased with my present and excited about my future. It was inspiring and soothing to rekindle with so many for whom the experience was so similar, I was disappointed to see a few for whom Kutz was not a springboard, rather it remains the pinnacle of their experiences, and they find little to look forward to and spend far too much time reflecting back.

I am not sure who or what I would be without Kutz Camp. It provided me with a sense of a personal and Jewish identity. There were those who recalled that at one time I wanted to join the rabbinate. That was not to be and I believe my days as nurse’s assistant kindled my desire to become a physician. I trust that I am contributing to Tikkun Olam תיקון עולם‎ by my work- a healing of the physical and the psychological rather than of faith. This weekend I saw many, many remarkable young rabbis and cantors and educators. I am proud of the work they are doing, but realize it is not the work I was not meant to do.

This weekend did leave all of us influenced by Kutz with a huge task- to ensure that Kutz remain a vital force in the Reform Jewish Community. I realize that the last few years I have not done my part and I intend to change that. I hope others were inspired to do the same.

Cool! I love seeing your blogs!

two posts in one day?
welcome back to blogging my friend