Making a promise to make the world more beautiful

Chanan Mazal who once lived "in the shadow of the George washington Bridge" (as did my father) now creates with light and shadows in the ancient city of lights, Jerusalem. 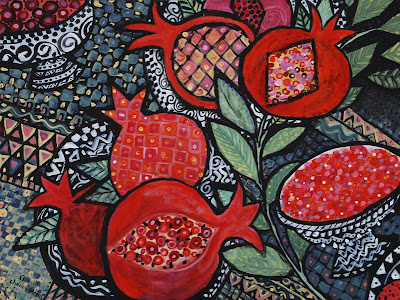 The pomegranate has been the focus of many artists' work. The Song of Solomon compares the cheeks of a bride behind her veil to the two halves of a pomegranate. They decorated the pillars of King Solomon's temple and the robes and regalia of Jewish kings and priests.
Collecting Jewish Art is a mitzvah...Not only will the collector announce to the visitor that homeowner is proud to be Jewish, but the collection supports artists and artisans whose handiwork praises our one G'd. Why not make it one of your promises for the coming year to begin or continue collecting Judaic art?
Posted by DrMom at 1:26 AM

Toby, I am so happy that you have dusted off your blog and started posting again. The art you find is very inspiring for me. thank you my friend.

Your suggestion to help support Jewish art/artists is also a mitzvah! Our Jewish culture is kept alive, in part, by Jewish art and creative thought! Thank you
Ruth Shapiro
www.mmezuzahjudaicajewelry.blogspot.com