What Reform Jews don't Hear this time of year. 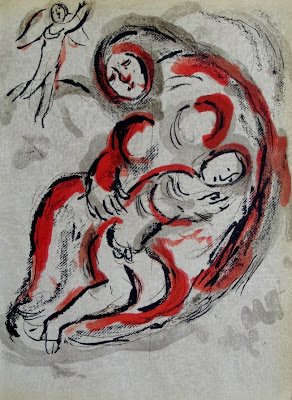 Traditionally, we Reform Jews observe only one day of Rosh Hashanah, not two. As a result our rabbis chose which Torah portion was the more important one to share with congregants, and as you know, that was the Akeidah, the binding of Isaac. What we miss, is the story of how Sarah has Abraham cast Hagar and their son out of the community and into the desert. As we know now, that casting out of Hagar led to the development of the Isalmic nation. The artwork above is that of Marc Chagal's depiction of Hagar in the desert.

This translation was taken from the JPS Tanakh

Chapter 21
1 The Lord took note of Sarah as He had promised, and the Lord did for Sarah as He had spoken. 2 Sarah conceived and bore a son to Abraham in his old age, at the set time of which God had spoken. 3 Abraham gave his newborn son, whom Sarah had borne him, the name of Isaac. 4 And when his son Isaac was eight days old, Abraham circumcised him, as God had commanded him. 5 Now Abraham was a hundred years old when his son Isaac was born to him. 6 Sarah said, "God has brought me laughter; everyone who hears will laugh with me." 7 And she added,
"Who would have said to Abraham
That Sarah would suckle children!
Yet I have borne a son in his old age."

8 The child grew up and was weaned, and Abraham held a great feast on the day that Isaac was weaned.

9 Sarah saw the son whom Hagar the Egyptian had borne to Abraham playing. 10 She said to Abraham, "Cast out that slave-woman and her son, for the son of that slave shall not share in the inheritance with my son Isaac." 11 The matter distressed Abraham greatly, for it concerned a son of his. 12 But God said to Abraham, "Do not be distressed over the boy or your slave; whatever Sarah tells you, do as she says, for it is through Isaac that offspring shall be continued for you. 13 As for the son of the slave-woman, I will make a nation of him, too, for he is your seed."

14 Early next morning Abraham took some bread and a skin of water, and gave them to Hagar. He placed them over her shoulder, together with the child, and sent her away. And she wandered about in the wilderness of Beer-sheba. 15 When the water was gone from the skin, she left the child under one of the bushes, 16 and went and sat down at a distance, a bowshot away; for she thought, "Let me not look on as the child dies." And sitting thus afar, she burst into tears.

17 God heard the cry of the boy, and an angel of God called to Hagar from heaven and said to her, "What troubles you, Hagar? Fear not, for God has heeded the cry of the boy where he is. 18 Come, lift up the boy and hold him by the hand, for I will make a great nation of him." 19 Then God opened her eyes and she saw a well of water. She went and filled the skin with water, and let the boy drink. 20 God was with the boy and he grew up; he dwelt in the wilderness and became a bowman. 21 He lived in the wilderness of Paran; and his mother got a wife for him from the land of Egypt.

22 At that time Abimelech and Phicol, chief of his troops, said to Abraham, "God is with you in everything that you do. 23 Therefore swear to me here by God that you will not deal falsely with me or with my kith and kin, but will deal with me and with the land in which you have sojourned as loyally as I have dealt with you." 24 And Abraham said, "I swear it."

25 Then Abraham reproached Abimelech for the well of water which the servants of Abimelech had seized. 26 But Abimelech said, "I do not know who did this; you did not tell me, nor have I heard of it until today." 27 Abraham took sheep and oxen and gave them to Abimelech, and the two of them made a pact. 28 Abraham then set seven ewes of the flock by themselves, 29 and Abimelech said to Abraham, "What mean these seven ewes which you have set apart?" 30 He replied, "You are to accept these seven ewes from me as proof that I dug this well." 31 Hence that place was called Beer-sheba, for there the two of them swore an oath. 32 When they had concluded the pact at Beer-sheba, Abimelech and Phicol, chief of his troops, departed and returned to the land of the Philistines. 33 [Abraham] planted a tamarisk at Beer-sheba, and invoked there the name of the Lord, the Everlasting God. 34 And Abraham resided in the land of the Philistines a long time.
Posted by DrMom at 7:53 AM

That's interesting. I attend a shul that is part of Liberal Judaism here in the UK, part of the worldwide Progressive movement. I believe that we split each portion into three so we get to hear the entire portion in a 3 year period. Or, if you're like me, you read the entire portion anyway, at home!

rachel
PS - I do like your blog very much!