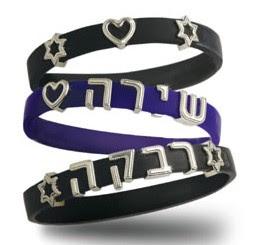 WHAT IS IN A NAME?
The naming of a Jewish child is a most profound spiritual moment. The Sages say that naming a baby is a statement of her character, her specialness, and her path in life. For at the beginning of life we give a name, and at the end of life a "good name" is all we take with us. (see Talmud - Brachot 7b; Arizal - Sha'ar HaGilgulim 24b)
Further, the Talmud tells us that parents receive one-sixtieth of prophecy when picking a name. An angel comes to the parents and whispers the Jewish name that the new baby will embody.
Yet this still doesn't seem to help parents from agonizing over which name to pick!
So how do we choose a name? And why is the father's name traditionally not given to a son -- e.g. Jacob Cohen Jr., Isaac Levy III? Can a boy be named after a female relative? Can the name be announced before the Bris?
JEWISH CUSTOMS
Naming a Jewish baby is not only a statement of what we hope she will be, but also where she comes from.
Ashkenazi Jews have the custom of naming a child after a relative who has passed away. This keeps the name and memory alive, and in a metaphysical way forms a bond between the soul of the baby and the deceased relative. This is a great honor to the deceased, because its soul can achieve an elevation based on the good deeds of the namesake. The child, meanwhile, can be inspired by the good qualities of the deceased -- and make a deep connection to the past. (Noam Elimelech - Bamidbar)
The name forms a metaphysical bond between the soul of the baby and the deceased relative
What if you would like to use the name of a relative who passed away, but another living relative has the same name? In that case, if the living relative is closely related to the baby -- parent, grandparent, or sibling -- then you should not use the name. Otherwise, it's okay.
Sephardi Jews also name children after relatives who are still alive. This source is from the Talmud, which records a child named after Rabbi Natan while he was still alive (Shabbat 134a).
Some customarily choose a name based on the Jewish holiday coinciding with the birth. For example, a baby born at Purim-time might be named Esther or Mordechai. A girl born on Shavuot might be named Ruth, and a child born on Tisha B'Av, the Jewish day of mourning, might be named Menachem or Nechamah.
Similarly, names are sometimes chosen from the Torah portion corresponding to the week of the birth. Many names and events are mentioned in each Torah portion, offering a spiritual connection between the baby and that particular biblical figure. More information comes from here at Aish.com.

I received a nice comment from Alissa one of the propreitors of Alefbet.com which led me to check out her website. I was tickled to find these phenomenal name bracelets. I appreciate their work... and I certainly appreciated her kind words.
Posted by DrMom at 1:02 AM