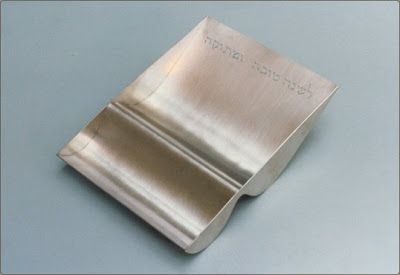 Ori Resheff is a third generation silversmith who creates works of Jewish ceremonial art, or Judaica. His work, like that of his mother and his grandfather, reflects the complexity and simplicity of the land of Israel. Resheff graduated from the Bezalel Academy of Art in Jerusalem, where he also taught, as had his grandfather before him."My work is about conviction and persistence, about art and about Israel coming into being together", Resheff explained. "My grandfather came to a barren and hostile land and worked, through his art, to create something intrinsic to the Jewish homeland. Melding the traditions of the West to the influences of the East evoked a whole new art. My mother joined him in his passion to create meaning and beauty. She inherited from him the pioneering spirit and the love for Israel. And she passed to me the ability to see and create beauty, even in times of scarcity. Our art and Israel were born from the same emotions: joy, hope, fear, love, and spirituality." His unique works, characterized by the clean lines and gentle curves of post-modernism, together with a carefully considered relationship between form and function. His craftsmanship is that of a perfectionist, a tradition also intrinsic to the work of his mother and grandfather. Noted Resheff, "My grandfather was never happy with his work. He was always reevaluating his designs and methods, trying to improve on them. I identify with his striving towards perfection and tell myself the same thing: next time, I'm going to do it better."Ori Resheff was awarded the 1992 International Honor Award of the Interfaith Forum on Religious Art and Architecture (IFRAA) for his Torah set, which won accolades from the jury for a "strong design, elegant forms and beautiful craftsmanship. The artist shows a loving respect for the Torah."Also in 1992, he won the Washington Craft Council Exhibition, in Washington DC, for his Elijah Cup. The Elijah Cup is crafted in two parts, the cup itself and a frame which serves as a stand for the goblet. The "frame" makes it impossible to drink directly from the cup, reflecting the traditional injunction against drinking from the goblet reserved for the prophet himself.His works have been displayed and are in the collections of the Jewish Museum New York, B'nai B'rith K'lutznik Museum in Washington DC, the Skirball Museum of the Hebrew Union College in Los Angeles, California, and the Museum of the Hebrew Union College in Cincinnati, Ohio. Yeshiva University Museum in New York. He exhibited in one man shows and group shows in the Israel Museum, Jerusalem, Pritam & Eames gallery in the US and in many galleries over the world.
Posted by DrMom at 1:43 AM