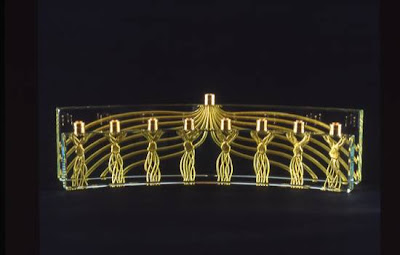 Every year around Chanukkah I get annoyed at how often I hear people misuse the word Menorah. This is mainly because I’m ornery. But still it’s probably good to know why a menorah and a Chanukiah are different.
Menorah: from Arch of Titus in Rome


Menorahs have seven branches and burn olive oil. There was a menorah in the Tabernacle, and then it was moved to the Temple. It was made out of pure gold, and all one piece. The instructions for how to craft it can be found in Exodus 25. Though now it’s become a symbol of Judaism, it was originally meant to symbolize the burning bush. The menorah was lit in the Temple, and when the Temple was looted by the Romans in 70 CE the menorah was taken to Rome and carried along during the triumph of Vespasian and Titus. A depiction of this event is preserved on the Arch of Titus that still stands today in Rome. It’s not clear what happened to the menorah after that. It may have been taken by the Visigoths or the Vandals, and later retrieved by the Bynzantine General Belisarius and taken to Constantinople. Basically, we don’t know, and no one seems to have it anymore. Anyway, the miracle in the story of Hanukkah is that the Maccabees were able to light the Menorah, and the light from that one small vessel lasted for eight days. 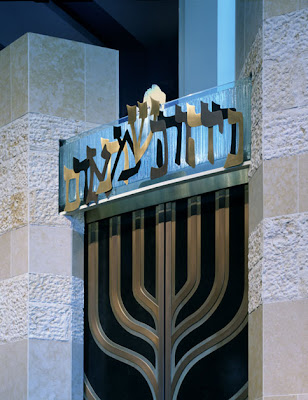 So, to commemorate the miracle of the Menorah, we light a Chanukiah, which has nine branches—one for each day of the miracle and a shamash. The name "chanukkiah" was given only in the end of the nineteenth century in Jerusalem by the wife of Eliezer Ben Yehuda, the revivor of the Hebrew language, but today in Israel chanukiah means the thing you light on Chanukkah, and menorah means the thing that was in the Temple.

The correct plural of menorah is menorot, but menorahs will do. The plural of chanukkiah is chanukkiot, but I guess chanukkiahs is cool, too.

There is a difference. I think ultimately the menorah is cooler because there’s a lot more history behind a menorah, but chanukiot are almost always more interesting looking.
Posted by DrMom at 5:55 AM