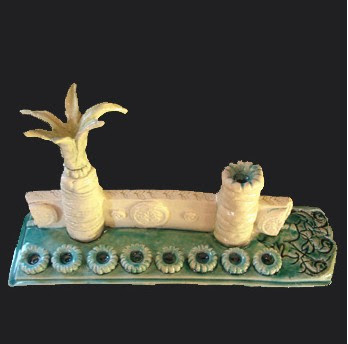 I have Chanukah on the Brain, I mean Blog this week.

I love the feeling of summer that this Chanukiah evokes... Can't you imagine sitting under a lush palm tree at your personal oasis, eating warm latkes with fresh applesauce...? This ceramic Chanukiah was created by Sygalle G.L.

Sygalle is an artist who lives and works in Israel and has been working with ceramics since 1991.

She was born in Jerusalem, and was raised in Eilat near the Red Sea. After studying in Bezalel Academy of Arts in Jerusalem, Sygalle moved to Zichron Ya'akov, where she opened her own studio and gallery.

Sygalle is influenced by Israel's strong light and vivid colors, it's landscapes and views, archeological finds in the area and from Jewish history.

Sygalle's intimate relationship with white clay has led her to experiment and develop a new ceramic Batik-like technique.
Using her own multi-layer glazing technique, she has influenced the colors, giving them new hues and depths, while creating textures which are similar to Batik.

Sygalle has participated in both local and international exhibitions and exhibits her work in her private gallery.
Posted by DrMom at 6:57 AM