Books- among our most precious treasures 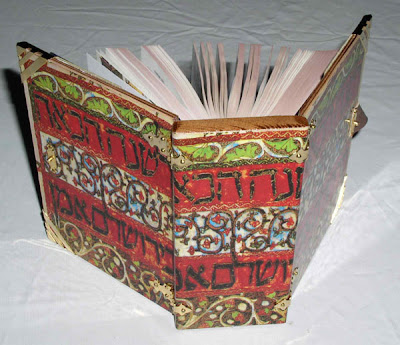 I went to the library yesterday. I love the library (and bookstores too). My husband and I are struggling to pass on our love of reading to your very bright albeit lazy seven year old. Any ideas?

Jack Jaget apparently shares my love of books (by the way... have you voted in my poll which is at the top of the sidebar)... Jack is a graduate of Music and Art High School and the Cooper Union Art School of New York. For a number of years he was Art Director at the World Publishing Company. He designed books for most major publishing companies in the States, winning numerous awards among them: Best 50 Books - American Institute of Graphic Arts, AIGA children's book selection (A total of 14 books), honor book for the Caldecott Medal, was a member of AIGA and the American Heritage of Graphic Arts.

In 1974 he immigrated to Israel with wife and three children and established a successful graphic studio designing for companies, hotels and banks such as the Sheraton and Carlton Penta, Bank Hapoalim, the BIRD Foundation, and others. Working with wood has always been his hobby, which he turned into an occupation. Each piece is individually fashioned in various woods, decorated with gold leaf. All metallic parts are gold plated. Finally; using the finest lacquer finishes, to give it the look of the Middle Ages; the feeling of time past. 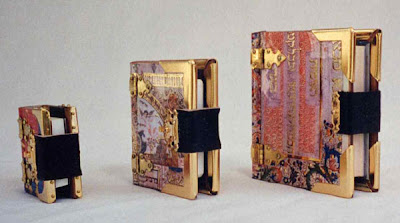 Some of the work has been presented to heads of corporations and persons who were presented with honorary degrees. Best known Statesman who were the recipients of books are the late King of Jordan and President George W. Bush.
Posted by DrMom at 7:43 AM

These are the most amazing books ever - I hope Dubya appreciates his, I'm jealous!!

(and yes, I answered the poll)