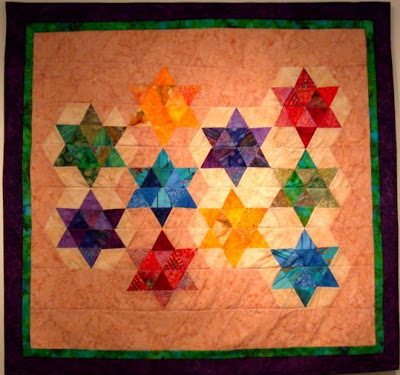 This wall hanging bright with stars of David was created by Berta Goldgaber and is 42"x 45" in size.


Why I live in Israel... by Ben Goldfarb
I was born and raised in the United States, and I am not ashamed to say that I love America. I feel a deep sense of gratitude toward the U.S. for providing a safe haven for Jews and other minorities. I enjoy my visits to the States, which reinforce positive feelings I have for many aspects of American culture and mentality.

NOTE: Once you live in Israel, Jewish law (Halacha) delineates specific guidelines regarding the permissibility of leaving Israel even for short trips. Consult your rabbi for more information.

Despite these positive feelings, however, I still decided to move thousands of miles away from home and settle in another country. Here are some of the reasons which led to my ascent to the land of Israel.

Historical mandate
In my humble opinion, I believe the future of the Jewish People revolves around our presence on Jewish soil. Jewish history is here in the making. Rather than being a spectator and supporter of Israel from abroad, I prefer to be an active participant in her history and destiny.

Education and culture
There is nothing like watching your children grow up in Israel. Fluent in unaccented Hebrew, they soak up religious texts with ease. They were given the gift of growing up in what I like to define as normative Jewish existence — being Jewish in a Jewish country. They are therefore free, for the most part, of the baggage of an exile mentality.

As for their educational opportunities, there are more students learning Torah now in Israel than in pre-Holocaust Europe. While many would argue that we haven't reached the quality of learning that was attained by the Torah giants and their students before World War II, most people would agree that the opportunities for Torah learning in Israel are by far the most diverse and extensive in the world.

Economic standard of living
There is a popular myth that one can't "make it" in Israel. This carries as much weight as many of the urban legends circulating on the Internet. I know of countless examples of Israelis who moved to the United States for the "good life" who are living hand-to-mouth. Alternatively, I am intimately familiar with numerous American expatriates and returning Israelis who are making a much better living here in Israel than they did in the land of opportunity.

The amount of money a person is destined to make in any given year is determined on the Jewish New Year (Rosh HaShannah). This amount of money will not be increased or decreased by a single penny, no matter what country you choose to live in. Moving to Israel will not necessarily decrease one's livelihood; it might even increase it.

Spiritual standard of living
Israel has the highest spiritual standard of living in the world. Almost everywhere you turn in Israel, you will find individuals and groups of people who are involved in spiritual growth, giving to others, and creating a better world. No one can deny that these activities take place in the Diaspora, but in my experience, the degree and depth of these spiritual pursuits in Israel surpass anything I have seen or experienced anywhere else.

These are some of the reasons why I live in Israel. While this list isn't designed to persuade anyone to move here, it is intended to be a partial explanation of why I shifted from the American to the Israeli dream.
Posted by DrMom at 7:15 AM