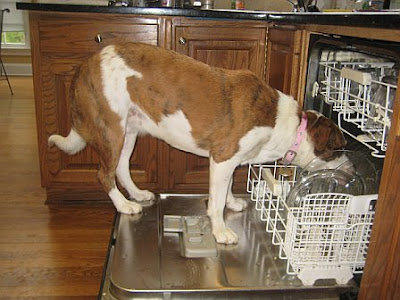 This is Wendy, my dog, a mix of this and that and a lot of love. Last week she decided she wanted to show that she could contribute to water conservation in Atlanta (we are in the midst of a three year drought) and she volunteered to prewash the dishes for me. For those of you who are saying YUCK, this is BEFORE the dishes are run through the machine.


From Lisa Katz: I almost fell off my chair when I first heard the latest craze among American Jews --Bark Mitzvahs for dogs.

A search on the Internet turned up photos of Bark Mitzvah parties in homes, gift packages for Bark Mitzvah dogs from pet stores, and invitations to Bark Mitzvah ceremonies from synagogues.

Are Bark Mitzvahs actually a spiritual event in the lives of American Jews today or simply an excuse for a party?

Some people do Bark Mitzvahs for Purim entertainment, some do it to raise money, and others do it simply for the fun of it. Those celebrating Bark Mitzvahs today are mostly Reform and Conservative Jews.

Bark Mitzvahs celebrated in private homes tend to be personal and fun.
Guests, who sometimes bring their own dogs along, greet the hosts with “Mazal Tov” and bring doggies presents for the Bark Mitzvah dog. The dog of honor generally feasts on bone-shaped doggy cake, while the human guests feast on gourmet food.

The Bark Mitzvah party of Kasha can be viewed online.

At the Doggie Salon

Some people have more formal affairs, and new businesses have cropped up to support them.

If you really want to go all out, then you can get the $95 Bark Mitzvah package from CleosBarkery. It includes: all meat canine Bark Mitzvah cake, happy Bark Mitzvah Hat, Doggie Treat Bag filled with draydel and menorah biscuits, Star Bark Mitzvah collar, and a ribbon balloon cake topper.

You can make sure your guests will remember the event by sending them home with a pet candy bar wrapped by wrapsodydesigns.com. The wrapper commemorates the Bark Mitzvah celebration and even provides personal information about the Bark Mitzvah dog.

Some people send their guests home with satin yarmulkes with the dog’s name and Bark Mitzvah date printed inside.

Yarmulkes just for the guests? Some Bark Mitzvah dogs get all dressed up for the special occasion. There’s been unprecedented demand for doggie-sized tallit and yarmulkes tailored to fit over dog ears.

Bark Mitzvahs celebrated at synagogues have a bit more of an “official” flavor to them.

Often Bark Mitzvahs performed by rabbis begin with the rabbi reciting a prayer or blessing the dogs. The prayer said when seeing beautiful animals is an ideal opener. The rabbi generally ends the ceremony by awarding a Bark Mitzvah certificate to the dog's owner.

One California Reform shul promotes it Bark Mitzvah ceremony with “All participating pets will receive blessings, treats and a special pet kippah/yarmulke.”

One Reform Shul, Beth Shir Shalom in Miami, holds Bark Mitzvah celebrations for the congregation members' dogs on Purim. The ceremony takes place in the synagogue parking lot and not in the sanctuary; thus, there is no chance of a dog having an accident in shul. Bark mitzvah dogs are given certificates, and the dogs’ family members bark and say a prayer.

Temple Kehillat Chaim, a Reform temple in Atlanta, uses the Bark Mitzvah celebration as a way to raise money. The synagogue sponsored a "Bark Mitzvah Day" fundraiser in which about 60 dogs competed in a dog-show spin-off. "Most Jewish" was one of the competition's categories.
Posted by DrMom at 10:43 AM

hmmmm that dishwasher view looks really rather familiar, except my dogs are smaller and so are the cats. What a great shot! I would never say ewwwww cause I think my dogs mouth is sometimes cleaner then mine!