The Jews of Uganda 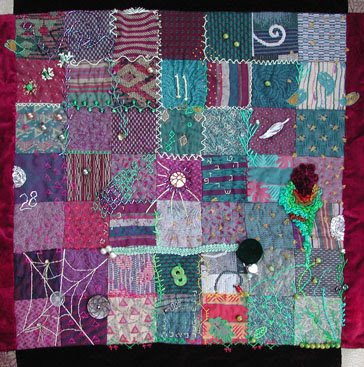 This Omer Calendar from Elizheva Hurvich was created in the Jewish year 5760 (2000) during the seven week counting period between Passover and Shavuot. On one side, seven rows of seven patchwork squares represent the 49 days which bridge the two holidays. Each square can serve as a visual meditation for the day. On the other side, embroidered in Hebrew, is the blessing one recites every night to fulfill the commandment of counting for these seven weeks (Leviticus 23;15 - 16, which reads:"You are to count from the day after the day of rest [Pesach] from the day you brought the Omer-waving offering until you've counted seven complete weeks. On the day after the seventh week, you will count 50 days...")
Also embroidered on the backside is a another text which can be used as a meditation before the counting. It can be translated:
May there be sweetness, Adonoy Our G-d, for us and may the works of our hands be substantial for us, may G-d establish the works of our hands.

This piece is made out of patchwork fabric. It can be read from the left to right, or reverse. It's way of "telling" time is not a tradition, linear, numerical reading. Like the traidition of "women's" arts, which speak in the tastes of food, in cookbooks, quilts, children's clothes and costumes, in a day to day life, this piece is soft, with undertain "boundaries," as the embroideries move from square to square, without much regard for the grid format.


I was listening to my I-pod this morning... I adore listening to podcasts as I drive or do my artwork. I heard a piece on the Jews of Uganda who are not what I thought they were. Rather than being the "lost tribe" that I assumed them to be, they are a group who converted to Judaism in the late 1800s. Once 3000 members strong, their numbers hover around 300.

Read this, and if you want more information, go here.

In the 1880s, British missionaries converted the powerful Bagandan warrior Semei Kakungulu to Christianity. Because Kakungulu was a Protestant, British colonists commissioned him to bring the fertile African lands near the Nile’s source at Lake Victoria under their influence. Kakungulu won the lands, but became disenchanted with the British when they limited his domain to a 20 mile square plot near today’s small city of Mbale, 160 miles from the Ugandan capital of Kampala. He broke with them in 1913 when he joined the Malachites, a movement that the British called a cult because it combined Christianity with Judaism and Christian Science, and began to rewrite the Christian bible as a Malachite tome. Kakungulu became more and more a follower of Jewish tradition and less a familiar Protestant. In 1919 he circumcised his sons and himself and declared his community Jewish.

Soon the British could communicate with him no longer and forced him from Mbale. Kakungulu fled to the foothills of Mount Elgon to a village called Gangama where he started a separatist sect known as Kibina Kya Bayudaya Absesiga Katonda (the Community of Jews who Trust in the Lord). After the warrior’s death, his followers split into two groups – one that retained a belief in Jesus and another, the Abayudaya, that became devout Jews. These Abayudaya isolated themselves from the Christians for fear of reprisal, passing Jewish traditions from generation to generation, maintaining their community through a succession of anti-Semitic regimes such as that of Idi Amin, whose soldiers outlawed the Jews’ rituals and destroyed their synagogues. With poor communications equipment and very little personal mobility, the Abayudaya did not establish connections with any outside Jewish communities; they maintained their traditions in total isolation. In the ‘60s and ‘70s the initial members of the Abayadaya community began to grow elderly and implored the rising generation to extend themselves to Jews outside of Uganda. The community reached out to Israel in the ‘60s and ‘70s and even had the first secretary of the Israeli embassy in Uganda visit them.

In 1992, Matthew Meyer, a Brown University student studying in Kenya, heard of the Abayudaya and traveled to Mbale to spend the Sabbath with them. He returned to the United States with photographs, cassettes of the community choir singing Hebrew prayers to African melodies and letters from Abayudaya community members in both English and Hebrew. Since then, a delegation from Kulanu and a handful of other English-speaking travelers have visited the Abayudaya, bearing gifts such as a new Torah and money from the Brown University Hillel to build a synagogue.
Posted by DrMom at 9:42 AM