No mikvah for those who engage in premarital sex!

For the last of this series of handwashing bowls, one from Sheila Caplan:
From one of my favorite blogs: Lilith 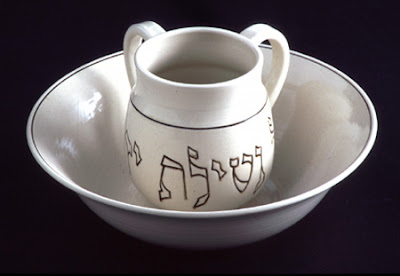 In an attempt to stem a trend of quasi-condoned premarital sex among young modern Orthodox men and women, Israel’s Chief Ashkenazi Rabbi Yona Metzger has issued a prohibition against allowing single women to use mikvaot (ritual baths). In a letter dated January 24 and addressed to the rabbis of the Land of Israel, Metzger warns of a trend in which young modern Orthodox men and women use mikvaot to circumvent one of the severest prohibitions connected with sexual intercourse.
“It is absolutely prohibited to allow a single woman to immerse herself in a mikve,” wrote Metzger. “And it is an obligation to prevent her from doing so.”

The JPost article explains the halacha [Jewish law] involved in the issue but the basic gist is that by going to the mikva, single women make it (debatably) more halachically okay for themselves to have sex (see here for one single woman’s confession about engaging in this practice). Rabbi Metzger maintains — and surely the majority of other Orthodox rabbis would agree with him — that regardless of whether premarital sex can be technically acceptable from a Torah law perspective, it’s still completely unacceptable from his perspective, that is, the perspective of Rabbinic law, which banned premarital sex for its own sake — it is bad, wrong, forbidden in and of itself, not just because of technicalities involving menstruation.

The debate over the merits and demerits of premarital sex, however, should be regarded separately from the debate over mikva use amongst single women. The latter is more nuanced and, as such, bears some similarity to the debate over abstinence-only vs. comprehensive sex education (a debate largely held in the Christian v. secular arena that has recently opened up in the Jewish conversation).

Most educators on both sides agree that teenagers should not be having sex, but comprehensive sex educators acknowledge that they might, and in the event that they do, should be given the means to protect themselves. Proponents of abstinence-only education, on the other hand, say that giving kids information about contraception and STD prevention will only encourage them to have intercourse.

Similarly, the Rabbi Metzger camp says that premarital sex is prohibited and that we should not in any way enable single men and, especially, women to have sex. Perhaps Rabbit Metzger believes — naively, many would say — that the prohibition of niddah bears so much halachic weight to that it will deter women — unable to release themselves from its clutches without using the mikva — from having sex. Allowing unmarried women to use the mikva is only encouraging illicit behavior.

But others, like Prof. Tzvi Zohar of Bar-Ilan University, argue that some singles are probably going to have sex anyway, and the community should not prevent them from doing it in the most halachically fit way possible. To continue the sex education debate metaphor, shouldn’t we give people the means to protect their souls, as it were, rather than dismissing them completely as sinners whose sins can’t be mitigated?

To take the argument even further, why shouldn’t consenting adults who are fully aware of the relevant halacha have sex in whatever way see fit?

And that is, of course, what makes this debate completely different than that over sex education. We’re talking about adults, not children.

I’m not arguing that mikvas should put up a welcome mat inviting in single women, and they certainly don’t. The practice is already banned. Rabbi Metzger was just reiterating the ban, since apparently people had stopped listening. Even still, it’s been my understanding that mikva ladies do not knowingly allow single women in. But a don’t-ask-don’t-tell policy seems more befitting of adults, who have the right to make their own decisions. From a halachic perspective, it’s certainly better than unmarried women having sex without going to the mikva, and it’s better then single Jewish men “sowing their wild oats” with non-Jewish women, who are halachically “safe” from the laws of niddah.

But this insistence on barring single women from using the mikva brings up an unrelated but perhaps even more important question. Why can any man or boy use the mikva whenever he wants to spiritually purify himself while women are only allowed to use it within the very specific context of niddah? There’s no good reason why, if I’m feeling in need of a little spiritual cleansing, no matter what my age or marital status, why I shouldn’t be able to use the mikva.

The only reason is fear of what bodily defiling such a spiritual cleansing might lead to. And that fear — why is there so much fear? — results in rabbinic authority’s unwillingness to give women control over their own bodies.