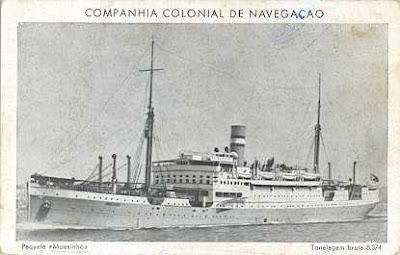 Well, my father turned older today! Dad is an interesting guy... born in Germany, he came to the U.S.A. with his parents on Labor Day 1941 (but they were not allowed off the boat until the following day becasue of the holiday). He arrived on the last boat that left Europe during the war. Dad arrived on the SS Mouzinho and some how or another I tracked down the passenger list. As Jews, this history is important to keep...

This is what was said about my dad:

Goldschmidt, Jurgen, head tax status: left blank; age: 5 yrs;
sex: m; married/single: s; occupation: none;
read/write: no; which languages? German;
Nationality: German; Race or People: Hebrew;
Place of Birth: Hannover, Germany;
Immigration Visa, Passport Visa or Reentry Permit no.: Q.I.V. 8320;
Issue Place and Date: Hamburg, May 21, 1941;
Verification of landing: left blank;
last permanent residence: Cologne, Germany;
friend/relative: Bertha Israel, sister, Allerheiligenstr. 52,
Frankfurt/Main;
to US via foreign country?: left blank; Destination: N.Y., N.Y.C.;
has ticket for final destination? yes; Paid by? Uncle;
in possession of $ 50?: $25.00;
has been in US before (when, where, date)?: no;
joining friend or relative?: Isidor Hoppenheimer, brother-in-law,
47 Washington Ave., App. 45, N.Y.C.
NOTE: brackets show that passengers 212 - 215 are travelling together and
that they have $25.00 together. The country of birth should be Germany.
The relatives mentioned should probably be aunt and uncle. Son is written
behind the name. UNDER 16 is stamped in front of the name. To spell Jurgen
without u Umlaut would be very unusual, therefore the name is probably be
Jurgen with u Umlaut to spell Jürgen.
Posted by DrMom at 7:40 AM