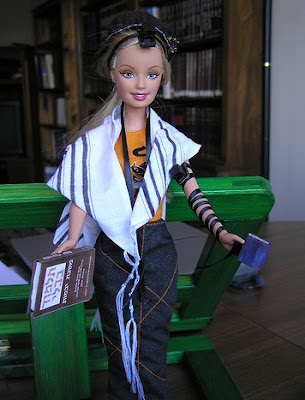 At the close of this week's parsha, G'd gives instructions to Moses and Aaron regarding Tefillin... The soferet Jen Taylor Friedman redesigned Barbie for today's modern Jewish woman who wishes her daughter to have a strong sense of identity both as a Jew and a Woman.

Parsha Bo begins when G-d tells Moshe that He is hardening Pharaoh's heart so that through miraculous plagues the world will know for all time that He is the one true G-d. Pharaoh is warned about the plague of locusts and is told how severe it will be. Pharaoh agrees to release only the men, but Moshe insists that everyone must go. During the plague, Pharaoh calls for Moshe and Aharon to remove the locusts, and he admits he has sinned. G-d ends the plague but hardens Pharaoh's heart, and again Pharaoh fails to free the Jews. The country, except for the Jewish People, is then engulfed in a palpable darkness. Pharaoh calls for Moshe and tells him to take all the Jews out of Egypt, but to leave their flocks behind. Moshe tells him that not only will they take their own flocks, but Pharaoh must add his own too. Moshe tells Pharaoh that G-d is going to bring one more plague, the death of the first-born, and then the Jews will leave Egypt. G-d again hardens Pharaoh's heart, and Pharaoh warns Moshe that if he sees him again, Moshe will be put to death. G-d tells Moshe that the month of Nissan will be the chief month. 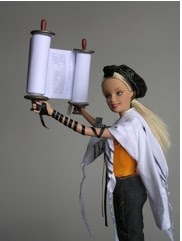 The Jewish people are commanded to take a sheep on the 10th of the month and guard it until the 14th. The sheep is then to be slaughtered as a Pesach offering, its blood put on their door-posts, and its roasted meat eaten. The blood on the door-post will be a sign that their homes will be passed-over when G-d strikes the first-born of Egypt. The Jewish People are told to memorialize this day as the Exodus from Egypt by never eating chametz on Pesach. Moshe relays G-d's commands, and the Jewish People fulfill them flawlessly. G-d sends the final plague, killing the first-born, and Pharaoh sends the Jews out of Egypt. G-d tells Moshe and Aharon the laws concerning the Pesach sacrifice, pidyon haben (redemption of the first-born son) and tefillin.
Posted by DrMom at 9:51 AM