The Other Side of Slavery 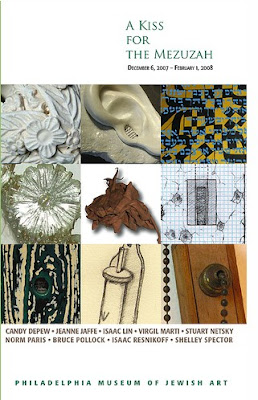 It might be time to take a trip north to the Philadelphia Museum of Jewish Art. They are havinga an exhibit called "A Kiss for the Muzuzah. Numerous artists have been asked to contribute... and their work is so diverese. Let me know if you have the privilege to attend.

A reconstructionisht view on Va'era.

Each year at Passover, we are asked to recall that we were once slaves and strangers and no matter who we are now to act according to this heritage.

Although it might be hard to accept our legacy of slavery, I think it is much harder for us to accept another and equally true version of the story that begins with Joseph and ends with the Exodus from Egypt that our ancestors were oppressors in Egypt.

History tells us that during the Intermediate Period (1786-1567 BCE) ancient Egypt was ruled by the Hyskos, who seemed to have been at least in part a Semitic people. After about two hundred years they were overthrown and rule by Egyptians reestablished. How well this fits with our text.

We know of and celebrate Josephs administration leading up to and during the famine. We see Pharaoh's gratitude to Joseph and extension of hospitality to his family so that they come to Egypt and become a multitude. But then there arises a Pharaoh who did not know Joseph, and apparently without any valid reason who then enslaves the Jews.

But if we read the text carefully, we see that Joseph forced the Egyptians to give their grain to the government during the years of plenty -- he piled up grain like the sand of the sea. When the famine came, all the world came to Joseph crying for bread, and the people of Egypt were forced to buy back their own grain. Imagine how rich and powerful Pharaoh was as a result and how the Semites brought to Egypt by Joseph benefited.

When we read that later there arose a Pharaoh who did not know Joseph, we can see this as recalling the time when the Hyskos were overthrown. Now the oppressors were enslaved and humiliated. Can we wonder that this Pharaoh's heart was hardened against this people?

Of course, this is all ancient history, assuming it is history at all. But I think that by remembering that our ancestors were once oppressors in Egypt we can construct more moral lives. Recalling their slavery through the millennia has given us empathy with the oppressed and a willingness to support freedom and liberty. Recalling their role in tyranny may prompt us to consider ways in which we act in complicity with the oppressor. It may help us to gain humility and to understand that these injustice has consequences. Those once oppressed may rise up and take vengeance on their oppressors. Or maybe even worse, by acting as oppressors, we lose what is so valuable in our tradition and lose ourselves as Jews.

The text tells us our ancestors were enslaved for 400 years and only gained liberation through the strong and outstretched hand of God. Even then they were so lost from the selves they should have had, needed to have to play a moral role in the world, that they stumbled through the desert like babies, even unable to feed themselves.

If we act as oppressors, if we then must bear the fruits of our acts, can we count on the mercy of such a God to act once again to lead us to freedom? And if we have the moral understanding of infants, can we ever find our way to ethical adulthood?

I invite all of us to consider this alternate point of view as we read the story of Exodus these next few weeks and as we participate in our seders. What do we gain and I think we do gain if we are conscious that there are two stories told here both true. My father was a slave in Egypt. My father was a slaveholder in Egypt. And these two statuses are intimately related.
Posted by DrMom at 4:57 PM