Beth Neistat contributed to a Minnesota Exhibit Jewish Women and Prayer. Here is her Borei P'ree Ha'etz (blessing over the fruit).
A few of the laws as set out by Moses:

Cursing a Parent
Whoever curses his father or mother shall be put to death
Seduction
If a man seduces a woman who is not betrothed, he must pay a dowry and must marry her. If her father refuses to allow him to marry her, then he must pay the father the usual dowry money for women.
Lending Money 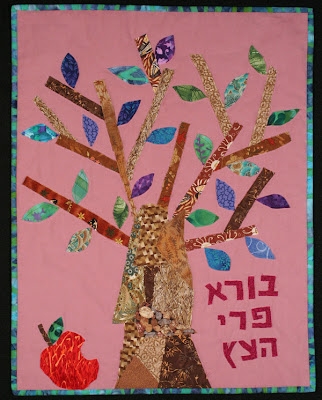 When you lend money to My people, to the poor man among you, do not press him for repayment. Also do not take interest from him.
If you take your neighbor's garment as security for a loan, you must return it to him before sunset. This alone is his covering, the garment for his skin. With what shall he sleep? Therefore, if he cries
out to Me, I will listen, for I am compassionate.
Justice and Festivals
Do not pervert justice for your degraded countryman in his lawsuit.
Keep away from anything false. Do not kill a person who has not been proven guilty or one who has been acquitted. Ultimately I will not let a guilty person escape punishment. Do not accept bribery. Bribery blinds the clear-sighted and twists the words of the just.
Do not oppress a foreigner. You know how it feels to be a foreigner, for you were foreigners in Egypt.
You may plant your land for six years and gather its crops. But during the seventh year, you must leave it alone and withdraw from it. The needy among you will then be able to eat from your fields just as you do, and whatever is left over can be eaten by wild animals. This also applies to your vineyard and your olive grove.
You may do whatever you must during the six week days, but you must stop on Saturday. Your donkey and ox must then be able to rest, and your maid's son and the foreigner must be able to relax. Be very careful to keep everything I have said to you.
Do not pronounce the name of another deity. You must not let it be heard through your mouth. Offer a sacrifice to Me three times each year.
Keep the Festival of Matzahs. Eat matzahs for seven days, as I commanded you, during the prescribed time in the month of standing grain, since this is when you left Egypt.
Do not appear before Me empty-handed. Also keep the Reaping Festival, through the first fruits of your produce that you planted in the field. There is also the Harvest Festival right after the end of the year, when you gather your produce from the field. Three times each year, every male among you must appear before HaShem, Master of the Universe. Do not sacrifice the blood of My Passover
offering in the presence of leavened bread. Do not allow the fat of My offering to remain overnight until morning. Bring your first fruits to the Temple of HaShem.
Do not cook meat in milk, even that of its mother.
Posted by DrMom at 10:47 AM