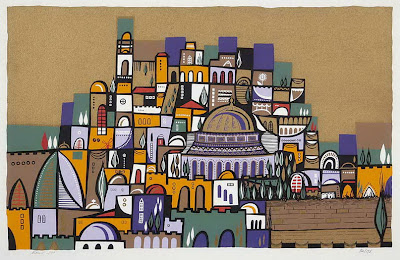 Naim Basson was born in Iraq in 1935 and immigrated to Israel in 1950. He studied painting and sculpture at the Avni Institute in Tel Aviv and at various art academies. Basson's wall paintings, reliefs and sculpture can be viewed in Maalot, at the Diplomat Hotel in Tel Aviv, the Marina Hotel in Bat Yam, the Caesar Hotel in Eilat, the Eyal Hotel in Eilat, the Tirat Hacarmel Hospital, the First International Bank in Tel Aviv, a 250 square meter relief at the Caesar Halls in Bat Yam and the biggest mezuzah in the world (4.8 meters) at the Israel Experience in Jaffa. Basson's works of art are exhibited in the collections of museums and galleries in Israel and the world over.

The Tenth of Tevet (also known as Asarah b’Tevet) is a fasting day in the Jewish calendar. Such is its importance that it is the only fasting day which, when it falls on a Friday, is observed fully. Other fasting days are moved if this occurs, so as not to interfere with preparations for the Sabbath. It occurs either 7 or 8 days after the last day of Hanukkah (depending on whether Rosh Chodesh of Tevet in that year lasts for one or two days).

The Tenth of Tevet is one of four fasting days that commemorate dark times in Jewish history. Tisha b’Av commemorates the destructions of the two Temples in Jerusalem. The breaching of the Jerusalem walls by the Roman Legions (70BC) is remembered on the 17th of Tammuz, and Tzom Gedaliah marks the commemoration of the assassination of Gedaliah ben Achikam, the Babylonian-appointed Jewish Governor of Judah. 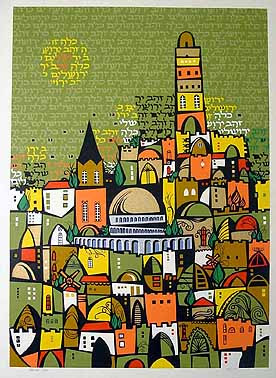 The Tenth of Tevet marks the onset of the siege of Jerusalem by Nebuchadrezzar of Babylon, which led to the destruction of Solomon’s Temple (often known as The First Temple) and Babylon’s conquest of Judah, sending the Jews into the 70 years of exile.

The fast commences at dawn and remains in force until sunset. Unlike some other fasts, there are no physical restraints (such as the wearing of leather shoes or bathing) associated with the Tenth of Tevet. The sick are exempt from observing the fast, as are pregnant and nursing women.

At services, special prayers are said along with the reading of the Torah.

The Tenth of Tevet has also taken on other observances not traditionally associated with its historical significance.

Some Jews have chosen the day as a “kaddish day” to commemorate the victims of the Holocaust who have no identifiable anniversaries of their deaths.

The minor festival of the 8th of Tevet (when King Ptolemy of Egypt forced 70 Jewish scholars to translate the Hebrew Bible into Greek) has been quietly subsumed into the Tenth of Tevet, rather than being a distinct remembrance day on its own with its own associated fast.

The 9th of Tevet is said to be the anniversary of Ezra the Scribe, a Jew comparable to Moses in the eyes of some believers. The commemoration of Ezra, and its associated Fast, have also been subsumed into the Tenth of Tevet
Posted by DrMom at 12:05 PM