Blessed is the match- on the last night of Chanukah 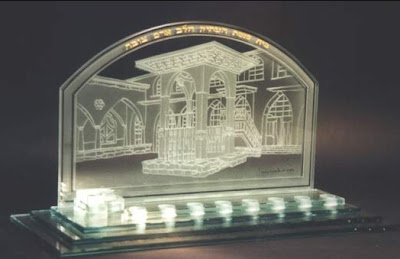 Jeremy Langford whose work I will show again tomorrow, is a glass artist extrordinaire. Born and educated in London, UK, Jeremy Langford today splits his time between The USA, Israel & The UK. Jeremy Langford is recognized as the leading glass artist in Israel today. He is a master glass artist working in over thirty different glass techniques. He creates superbly designed stained glass and sculpted glass for architectural settings and is commissioned to create fine art pieces and Judaica for private collections and museums around the world. His philosophy is to strive for perfection in quality and to 'stretch the limits' of technique and design. His unique approach to art glass work has earned him commissions for prestigious public and residential buildings, synagogues and for a wide range of VIP's and celebrities.

Blessed Is the Match is the first documentary feature about Hannah Senesh, the World War II-era poet and diarist who became a soldier, martyr and national heroine in Israel. Safe in Palestine in 1944, she joined a mission to rescue Hungary’s Jews. Shockingly, it was the only outside rescue mission for Jews during the Holocaust. Hannah parachuted behind enemy lines, was captured, tortured and ultimately executed by the Nazis. Incredibly, her mother Catherine witnessed the entire ordeal – first as a prisoner with Hannah and later as her advocate, braving the bombed-out streets of Budapest in a desperate attempt to save her daughter.

With unprecedented access to the Senesh family archive, this powerful story unfolds through the writings and photographs of Hannah and Catherine Senesh.
Posted by DrMom at 12:27 PM