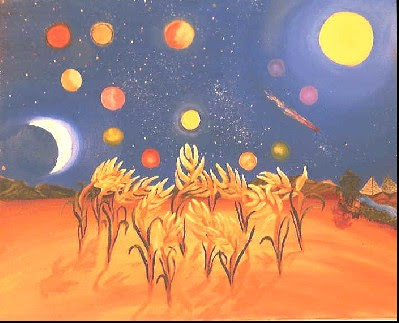 From Art Symbolic is an interpretation of Joseph's dream where his brother's as chafes of wheat bow down to him. Interesting to me is that the artist does not publish his name ANYWHERE! I wonder what Freud would say about that!!

This week’s Torah portion, Vayeshev, begins the “Joseph novella” — the surprisingly lengthy story of Joseph, which sets in motion the Israelites’ presence in Egypt, which in turn is a precursor to the Israelites’ liberation from Egypt. It’s a beautifully cylical story; just like the Israelite people, Joseph has to go down in order to be lifted up.


Twice in this week’s Torah portion, Joseph is cast down into dire circumstances. First his brothers cast him into a pit, and sell him into slavery; later, after he’s worked his way up the Egyptian status ladder, Potiphar’s wife frames him and he is thrown into prison.

The first downfall comes about, in a sense, because of Joseph’s dream interpretations. He has two dreams of dominance — one, that his brothers’ sheaves of wheat bow down to his; the other, that the moon and sun and stars all bow down to him — and these raise his brothers’ ire so strongly that they plot against him.

The second downfall comes about because of Joseph’s moral scruples. Potiphar’s wife tries to seduce him; he fends her off; she tears his cloak off, and uses it as “proof” that he acted improperly. This time, his dream interpretations come to his rescue; he is able to make sense of the dreams of several fellow prisoners, and one of those prisoners ultimately reports this to Pharaoh, who is in need of a good dream interpreter, and next week we’ll read about how that gets Joseph out of jail and on the path toward glory.

I think what has changed is Joseph. At the start of the story he is young, arguably a little bit spoiled — remember that amazing technicolor dreamcoat! no one else in his family has anything like that — and insensitive to how his dreamy tales might anger or offend his older brothers. He tells his dream stories at the breakfast table, blithely unaware that what he’s saying might be hurtful. That doesn’t excuse his brothers’ actions, but at least it makes some sense out of what they do.

But being cast into a pit, sold into slavery, and taken down into Egypt — that’s how the Hebrew phrases it; he descends into the land — matures Joseph in a hurry. And once he enters Potiphar’s house, a fascinating literary trope arises. We read that YHVH was with Joseph, and we read that line four times: twice in the early Potiphar story, and twice again after Joseph is jailed. The presence of God is with him, and as a result, even his continuing misfortunes don’t shake him.

Perhaps because God is with him, or perhaps because he is older and wiser, when he begins interpreting dreams in prison he does so in a way that helps his fellows, instead of angering them. Beyond that, he doesn’t take credit for the interpretations; he begins by saying “Surely God can interpret!” — giving credit for his wisdom to God.

When Joseph interprets his own dreams, insensitive to the needs of those around him, he sets misfortune in motion. But when he interprets the dreams of others, mindful of the Source from Whom his interpretations flow, he begins to rise through the ranks, on the path toward becoming the powerful man whose wisdom will allow the Egyptians, and the Israelites, to survive the famine to come.

What can we learn from this piece of Joseph’s story this year? First, that we need to take each others’ feelings into account when we open our mouths. Young Joseph’s dreams may have been dreams of benevolent dominance — maybe they foretold how he would someday be the person capable of stewarding the land, and his family, through feast and famine — but the way he expressed them made his brothers feel inadequate. We can relate both to Joseph’s eagerness, and to his brothers’ frustrations. This piece of the story is a cautionary tale.

Second, we can learn that, like Joseph, we are capable of change. When his story begins he is brash and a little bit unthinking. After a few hard knocks, he grows more able to bend, capable of putting his talents to work in the service of others, and capable of remaining thankful to God. All of us descend, in one way or another, into difficult circumstances at some times in our lives. If those circumstances help us to grow and mature, then like Joseph we can help others out of their own binds — which, in turn, means helping ourselves.

And third, we can learn that when God is with us, we can face our fear. At a pivotal moment in Joseph’s story, we begin reading the repeated phrase “YHVH was with him.” Of course, in an outward sense things seem to be going wrong for Joseph at that point. What can we make of this — that God is with him, and yet he’s thrown into jail again? Perhaps having God be with him doesn’t necessarily mean everything goes the way he might wish. Having God with him is a state of mind, a kind of trust that things will unfold as they should, that he can handle — and learn from — whatever arises.

That’s my prayer for all of us, tonight and in the days and weeks to come.
Posted by DrMom at 9:49 PM

>> but the way he expressed them made his brothers feel inadequate

or perhaps that Josheph's brothers thought of it as an act of self defense for their future generations to get rid of Joseph?