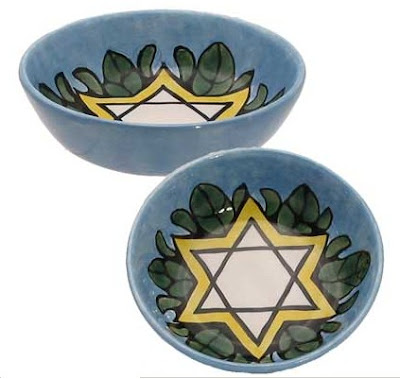 Ask someone who has grown up Jewish what does being cuturally Jewish mean to them, it is highly likely they will answer "Jewish food". This goes back to the very beginning as we learn in the story of Esau and Jacob and the bowl of lentil stew. Having a special place to serve your lentil stew will make it even yummier! Try serving in Nicole Engbold's Judaica bowls. They are very inexpensive and would make a great present too.
The parsha of Toldot centers around two stews, the actions that accompany each dish connected to the other. The first stew is the focus of the beginning of the parsha (Genesis 25:29-34), "And Jacob cooked a stew; and Esau came in from the field, and he was fatigued. And Esau said to Jacob: 'Let me swallow, please, from this red, red, for I am fatigued.' Therefore, was his name called Edom (Red). And Jacob said: 'Sell me this day your birthright.' And Esau said: 'Behold, I am at the point to die; and what profit shall the birthright do to me?' And Jacob said: 'Swear as today.' And he swore to him; and he sold his birthright to Jacob. And Jacob gave Esau bread and pottage of lentils; and he did eat and drink and got up and went his way. So Esau spurned his birthright."

Why was Jacob, certainly no chef, making a stew? The answer emerges later in the episode when the content of the red mixture is revealed, lentils. Lentils, the flattened, biconvex seeds of a small shrub native to western Asia, were probably the first cultivated legume, their carbonized remains found in the earliest Middle Eastern archeological sites. All lentils, available in an array of colors –- brown, dark-green, orange, pinkish, and red -- are members of the same genus and species. The brown and green varieties, which hold together better during cooking, are the most prevalent in the United States, while the red type, which cook quicker and break down while cooking, is more popular in the Middle East. In many cultures, they were considered poor man's food and generally avoided by the upper and middle classes except at times of severe famine. Perhaps this antipathy partially developed due to a side effect caused by the overconsumption of lentils -- bad breath (Berachot 40a). Therefore, in a well-to-do household such as Abraham's, the presence of lentils, something the Patriarch would not serve to his many guests out of respect, was indicative of something extraordinary. It would certainly offer a simple explanation as to why Esau did not recognize them in the pot and it makes his subsequent selling of the birthright even more telling as it was for such an insignificant dish.

Why lentils and why now? In the words of the Talmud, "It has been taught that that was the day on which Abraham our father died, and Jacob our father made a pottage of lentils to comfort his father Isaac. Why was it lentils? In the West (Israel) they say in the name of Rabbah ben Mari: 'Just as the lentil has no mouth, so the mourner has no mouth.' Others say: 'Just as the lentil is round, so mourning comes round to all the denizens of this world.' What difference does it make which of the two explanations we adopt? The difference arises on the question whether we should comfort with eggs (Baba Bathra 16b)." The Midrash added, "As a lentil is wheel-shaped, so is the world like a wheel. As a lentil has no mouth, so a mourner has no mouth, for a mourner does not speak. As a lentil symbolizes mourning, yet also joy; so here too there was mourning -- because of Abraham's death, and joy -- because Jacob received the birthright (Genesis Rabbah 63:14)." Jacob, in an effort to comfort his father, prepared the traditional mourning dish, something his mother could not do as a wife is excluded from cooking the Seudat Havra'ah (Meal of Consolation).

Jacob and Esau, at the point of Abraham's death, were themselves only fifteen, on the precipice of emerging as very different types of men. Indeed, the Midrash asserted that Abraham died at the age of 175, five years earlier than was intended, so as not to witness his oldest grandson going astray. At this point in his life, Esau was already "a cunning hunter, a man of the field," in comparison to his twin Jacob, "a tam (single-minded or pure) man, dwelling in tents (25:27)." Rashi explained the meaning of "dwelling in tents" as "in the tent of Shem and Ever," a euphemism for studying. According to Rashbam, however, the mention of tents revealed that Jacob was a shepherd and, therefore, remained close to home in contrast to his roving brother. Jacob went into the family business, so to speak. His aptitude can be seen later when he quickly fetched two kids from his flock for his mother and subsequently when he successfully went to work shepherding Laban's livestock. Esau, on the other hand, tended to wander far and wide, both geographically and spiritually. He practiced kivod av (honoring his father) with great devotion, yet proved to be extremely lax in most of the seven Noahide commandments.

Whatever his spiritual state, Esau, who loved his father so intensely, was surely saddened by the loss of a doting grandfather. Perhaps he purposely skipped the funeral to avoid confronting the reality of this loss. Or Esau might have helped bury his grandfather, then afterward his inclination was to go out hunting, behavior made more glaring by the response of his twin who stayed home to tend to their father. In either case, Esau obviously did not join the flow of family and friends surrounding Isaac at this traumatic moment, sharing memories of the departed or simply empathizing to help ease his pain. And when the eldest twin returned home, his only thought was for himself, for his food.