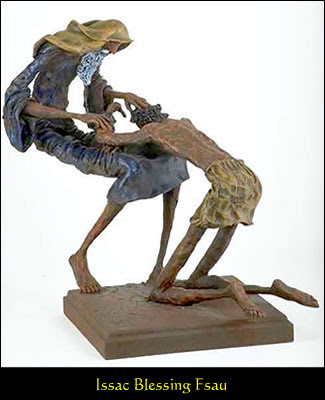 Philip Ratner does it again with his rendition interpretation of Esau receiving the (reluctant) blessing of his father Isaac. I was very excited last week when wandering my new Temple when I discovered amongst the collected Jewish art was a Philip Ratner sculpture. Now I know to where I will wander when I get shpilkes during services.This d'var is from Rabbi Dov Fisher....
In Parshat Toldot, we encounter the remarkable event described in Genesis 27, as Yitzhak prepares in blindness to confer an eternal blessing on one of his twin sons.

He wants to extend that blessing to the viscerally evil Esav, who nevertheless always has acted with the utmost respect for his father. Esav has Yitzhak figured out, and Yitzhak really loves him. By contrast, Rivkah is devoted uniquely to the simpler, gentler, less charismatic Yaakov.

Why the dichotomy? We have met Rivkah as a kind, young lady, offering water to slake the thirsts of Avraham's servant, Eliezer, and his camels. We have heard a midrash that her father, Betuel, attempted to poison Eliezer's food but died himself when an angel sent by God switched the plates. Later, we have learned of Rivkah's difficulty in conceiving and of her travails in bearing these particular twins to term.

We further will learn that her brother is worse than her dad. Besides her murderous father, Rivkah's brother, Lavan, is a prototype for Simon Legree. Lavan will squeeze some 20 years near-slavery out of his nephew and son-in-law, Yaakov, after switching daughters on Yaakov's wedding night, pulling the beautiful and desired Rachel out and slipping the sad-looking Leah in her stead. Even as Lavan steals from Yaakov for two decades, his own daughters will lament that he has stolen all he could from them, too, treating them as veritable strangers. That's Rivkah's bro.

So it emerges that although she is an incredibly sweet soul, Rivkah also grew up in a household with dramatic issues of dysfunctionality at its core. To put it simply, she grew up street-smart.

On the other hand, Yitzhak was intensively protected. Not only were his parents the progenitors and founding patriarch and matriarch of the Jewish people, but they further protected the spiritual elevations of their home by expelling the Yishmaels and Hagars who threatened Yitzhak's innocence.

The home was sterilized for spirituality, cleansed of any foreign influence. As a further protection, Avraham virtually hand picked Yitzhak's wife by setting guidelines when he dispatched Eliezer, his servant, to find a suitable match:

1) No one from the surrounding environs, thus no one who will bring along in-laws and other corrupting and disruptive influences;

2) Only someone from Avraham's own birthland in Charan, assuring both that the wife would be alien to the local environment, thus impeding assimilation into the morally perverse Canaanite culture, and that another set of prospective in-laws would be kept far out of reach.

Thus, Rivkah was raised in a streetwise milieu, while Yitzhak was extremely insulated. So Esav easily played to Yitzhak's innocence.

By contrast, Rivkah had the tools to read Esav like a roadmap. It then devolved on her to draw on her own street-smarts to save the day, to move her own intensely protected son, Yaakov, to the fore. For this, she drew on a tactic that seems unique to her family -- the switcheroo.

In time, as the family legends grow, Yaakov's sons one day will deceive him with animal blood they will say is Yosef's blood on the precious striped coat. And then Yosef will disguise himself from his brothers in the Pharaoh's palace.

In the end, is the switching of the brothers justified to assure that Yitzhak's blessing was conferred properly? The commentators are not all of one mind. What if Rivkah had tried reasoning with Yitzhak, even months and years earlier, trying to use her street-smarts to enlighten him, in his protected spiritual innocence, as to Esav's true character of evil? Perhaps she did try unsuccessfully, and we do not know. Perhaps not.

Yitzhak ultimately is satisfied that he acted correctly in blessing Yaakov; he reiterates Yaakov's blessing later with full scienter. But consider the price: Esav feels cheated and pledges to murder Yaakov as soon as his father dies.

Rivkah, hearing of the intent, desperately persuades Yitzhak to dispatch Yaakov to Lavan's house to find a wife. Yaakov ends up exiled for 20 years, victimized incessantly through two decades by an uncle and father-in-law so heinous, that the haggadah recounts that Lavan was worse than Pharaoh.

It is not clear whether Rivkah had an effective alternative to switching and disguising Yaakov to obtain Yitzhak's eternal blessing. But it does seem that the idea of switching may well have come from the culture of her upbringing, reared in the house of Betuel and Lavan. When in doubt, switch them out.

Sometimes it is useful for each of us to pause, too, and to wonder what practices and shticklach we practice in our homes, in full view of our children, with the attendant consideration of whether these behavioral quirks and anomalies that we sanction as normative and convenient will be passed down through our children and theirs in generations to come.

And in that light, we well might ask: Is it worth it? To deceive? To live by incessant white lies? To constantly criticize? To yell? To measure people by money? To deny fault and refuse ever to apologize? To always be the one who takes and never the one who gives? To be arrogant in one's self-estimation?

With children watching and emulating -- is it worth it?
Posted by DrMom at 12:19 PM