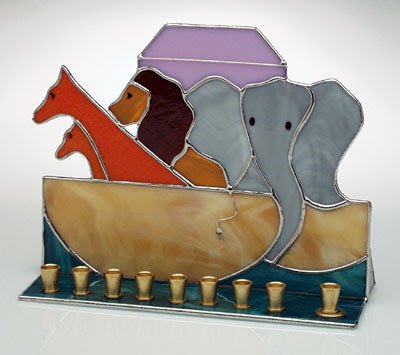 These delightful hannakiot are from the studio of Susan Fullenbaum. For over 20 years, Susan has created a wide selection of art ranging from attractive boxes and figurines to large window panels. Her current work focuses on themes taken from Jewish life and her own developing awareness of Jewish tradition. "I receive from my art as much as I put into it, " says Susan. As she concentrates on depicting Jewish themes, her own life is enriched, which in turn, enriches her creations.

Adam’s descendants have corrupted the world with immorality, idolatry and robbery. Recognizing the wickedness in humanity, God regrets that human beings had been created. Adonai, therefore, planned to destroy all living things. Noah, however, was the sole righteous man of his era – an individual who, despite God’s disappointment, found favor with God.
God informs Noah of the plan to destroy the earth with water and instructs him to escape the Flood by building an ark of gopher wood, covered inside and out with pitch. The ark is to be 300 cubits long, 50 cubits wide, and 30 cubits tall, with an opening to allow light in. The entrance is to be on the side of the ark. The ark is to be made with three decks. God tells Noah to bring his wife, sons and their wives onto the ark. God further instructs Noah to bring seven pairs of each “clean” animals on to the ark and one pair of each “unclean” animal. A pair is a male and its female mate. God also tells Noah to bring food into the ark for his family and the animals.
On the “seventeenth day of the second month,” the fountains of the deep burst apart, and the floodgates of heaven broke open. The rain fell for forty days and forty nights; the waters rose forty-five feet above the highest mountains, and all existence on earth was blotted out. After 150 days, the water begins to recede. On the 17th day of the 7th month, the Ark comes to rest on Mount Ararat. Once the flood subsides, Noah sends out two birds, first a raven which travels about the earth until the land is dry and the second, a dove which cannot find a dry place to rest and returns to the ark. Noah waits seven days, sends the dove out again and it returns with an olive leaf. Noah waits an additional seven days and sends the dove out again; it does not return. Noah takes this as a sign that it is now safe to leave the ark.
God then tells Noah and his family to leave the Ark. Noah brings offerings to God from the animals in the Ark which were carried for this purpose. God vows never again to flood the entire world and gives the rainbow as a sign of this covenant. Noah and his descendants are now permitted to eat meat, unlike Adam. Noah plants a vineyard and becomes intoxicated from its produce. Ham, one of Noah’s sons, delights in seeing his father drunk and uncovered. Shem and Yafet, however, manage to cover their father without looking at his nakedness, by walking backwards. For this incident, Ham is cursed that his son Canaan will be the lowest of slaves. 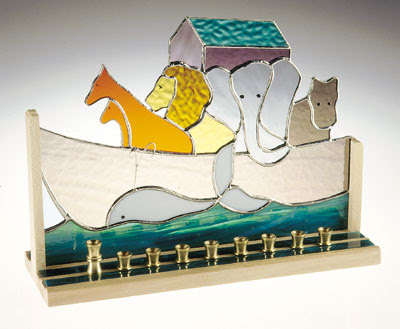 The Torah lists the offspring of Noah’s three sons from whom are descended the seventy nations of the world. The Torah records the incident of the Tower of Babel: All the peoples on the earth had one language. They migrated from the east and settled in the valley of Shinar. To make a name for themselves, the people decided to build a city to include a tower with a top penetrating the sky. God sees what the people plan to do and, concerned about their intention, turns their one, common language into many different languages, and scatters the people around the earth, thus preventing them from building the tower. The parasha concludes with the genealogy of Noah to Avram.
Posted by DrMom at 2:28 PM