Sukkah, Sukkot and a New Year! 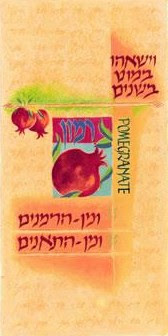 Sukkot will start this Thursday, the 27th of September and will continue for 7 days until Wednesday, the 3rd of October. Without the proper attitude one can feel bombarded by the holidays this time of year. This makes the sukkah an even important place, allowing us to separate from the hussle and bussle which surround us. To sit within the walls of a SharonSukkah must be a delight for the eyes and spirit! The Sharon Sukkah is a unique collection of wall hangings and panels for decorating the sukkah, combining Hebrew calligraphy, Biblical verses, and contemporary designs of themes associated with the Land of Israel.


Sukkot is the Jewish New Year?
The days are growing shorter, the breeze is picking up, and in my area, the leaves are just starting to display a tinge of yellow. In a few weeks, it will be time for the new year: Rosh haShanah, the day on which human beings were first formed out of the earth. Traditionally, Jews spend the two days of the New Year eating sweet foods as a siman (a sign, symbol, or blessing) that the coming year should be sweet, and reflecting on their past deeds in order to improve in the future. It’s a day of rebirth, a day of looking back and beginning to move forward. Yet originally, the day of Rosh haShanah probably wasn’t the new year at all.

If one reads the Bible, it becomes clear that Sukkot—the harvest festival that falls on the full moon two weeks after Rosh haShanah, also known as Chag haAsif, the Ingathering Festival— was the new year. In the Bible, Sukkot alone is called tzeit hashanah, the departure of the year. This was a day of pilgrimage when farmers brought their first fruits, and the pilgrims and priests drummed and danced all night to the light of giant torches. At dawn, palm branches waved, water was poured on the altar as a sign of blessing, and the assembled crowd chanted praises to the Divine and the Temple. Today, Jews still process in circles with their lulavim on each day of Sukkot, symbolically turning the wheel of life back to its beginning. At the end of Sukkot, the Torah is re-rolled and a special “bride” or “groom” of the Torah reads about the creation of the world. Doesn’t that sound more like a new year? Read more here.
Posted by DrMom at 10:58 AM