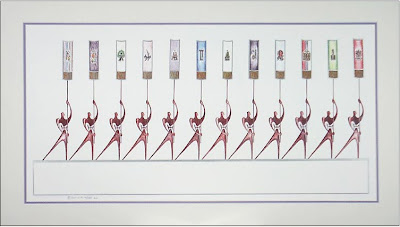 Victor Halvani is a Russian born Israeli artist whose interest in Torah is seen in his sculptures and paintings. Here we see his view of the 12 tribes. 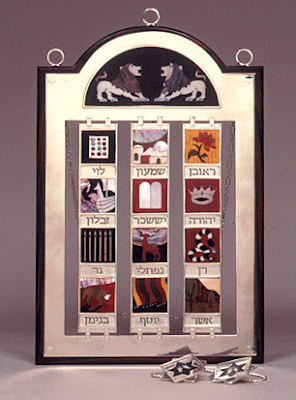 The Breastplate or Hoshen above comes from an Israeli couple. Lorelei Kellman Gruss was born in New York City in 1961 and emigrated to Israel in 1971. Lorelei apprenticed with some of the most prominent Israeli crafts people ,experiencing the early eighties revival of Judaic art. Her inlay and marquetry techniques are self tought and world renown. Alex Gruss was born in Buenos Aires, Argentina in 1957 and later moved to Israel. He was educated in history at Hebrew University and animation art at Bezalel Academy in Jerusalem. Important works of art have been conceived by his infinite creativity and originality.
Posted by DrMom at 12:16 PM