Beha'alotcha : Talk about a tough week! 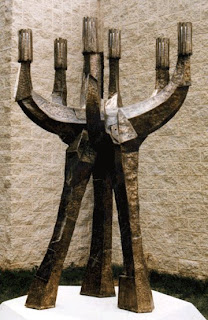 This weeks parsha is from Numbers 8:1 - 12:16
This week's portion begins with one more instruction for the High Priest: it is his duty to light the menorah. The Levites undergo a final act of purification, and after a formal presentation to the entire community, they now begin to serve in their special role.
The Torah records the observance of the first anniversary of the Exodus from Egypt. In this connection the laws of Pesach Sheni, a "Second Passover" for those prevented or unable to observe Passover on its correct date, are introduced.
The Israelites now depart the Sinai wilderness, and Moses' father-in-law, Jethro (called Chovav here) departs for his home in Midian. The Israelites complain and rebel - first in a general expression of dissatisfaction and a second time complaining about the monotony of manna and the lack of meat. God sends huge flocks of quail to sate their hunger, but appalled by the people's gluttony, smites them with a plague.
These rebellions cause Moses to despair. In response, God causes the prophetic spirit to rest upon the seventy elders as a sign of their authority in assisting Moses with the leadership of the people. Eldad and Medad begin to prophesize as well; Joshua expresses concern about their activity but Moses welcomes their addition to the prophetic ranks. 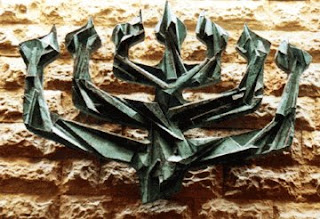 At the next campsite Miriam and Aaron challenge Moses' leadership role, claiming parity with their brother. God rebukes them for their words; Aaron confesses his error and Miriam is stricken with leprosy. Moses intercedes on Miriam's behalf, and the Children of Israel continue their journey.

Ascalon Art Studios is under the direction of artist/designer David Ascalon. The studio collaborates with congregations to create wonderful worship environments. These are two of their wonderful seven branched menorahs.
Posted by DrMom at 8:29 AM

Interesting that the parsha this week talks about the spirit resting upon the seventy elders, in the same week that Christians celebrate the Pentecost, the coming of the Holy Spirit upon the disciples of Jesus.