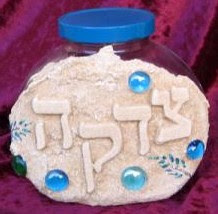 Leviticus is not full of action and intrigue- lots of dos and don'ts. The parsha Tzav continues as a how-to manual for ritual sacrifice.

For many years my wife worked in Jerusalem as a volunteer collecting and distributing clothing to the poor.Experience had taught her that it was too embarrassing for the poor to simply receive a "hand-out." Instead, often the clothes would be "sold" for quite nominal sums, freeing the beneficiaries of shame.

My wife also discovered that the condition of the clothing was critical. The poor people were far more sensitive to the way their clothing looked than an average, middle class family. Often, nice clothes would be rejected by the people because it did not appear brand new. I believe this was also due to their underlying feeling of embarrassment.

The Torah, in discussing the "sin offerings" to be brought to the Temple, shows great sensitivity to the feelings of the poor. The Torah permits each person to bring an offering according to his or her means. For example, a wealthy person could bring a bull, while a poor person could bring a flour offering.

But wouldn't it have been simpler for the Torah to simply suggest that everyone bring flour offerings?

In actuality, there was a great benefit in bringing an animal offering, for those who could afford to do so. First of all, it gave the wealthy an opportunity to give what they felt was a significant gift to the Almighty. More importantly, there was a tremendous psychological device associated with the sacrifices.When a person brought certain animal offerings, he would confess his sin while placing his hands on the animal. Then he would watch the animal being slaughtered. It was this stark emotional experience that would hopefully deter the person from sinning again.

Given this, the problem remained how to alleviate the embarrassment of the less fortunate when bringing their flour offerings. What the Torah does, in fact, is go out of its way to change its phraseology concerning the offerings of the poor. In all other instances, the Torah speaks the one bringing an offering as a "person." But the Torah refers to the one who brings a flour offering as a "soul."

The Talmud says that this change in terminology shows that in God's eyes, it is not the value of the offering that counts, but rather the intention behind it. Because the poor person may live from day-to-day not knowing where his next meal is coming from, it may well be that the flour offering of the poor was greater than the rich person's bull.

There's a basic question we should be asking? If the Torah is so sensitive to potential embarrassment, then how is it that everyone - whether rich or poor - brought a "sin offering" to the Temple? The activities in the Temple were a public event! So wouldn't everyone automatically know that they were bringing a "sin offering" offering because they'd transgressed? 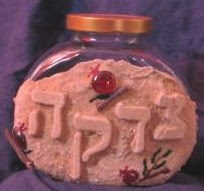 To minimize this potential embarrassment, the Torah prescribes that all "sin offerings" be slaughtered in the same location as the "burnt offering" - which was brought primarily as a voluntary offering, and thus lacked any negative connotations. Therefore, when a spectator would see a sin offering being brought, it would be unclear whether this was a sin or burnt offering. In this way, the transgressor would be spared embarrassment.

As in so many places, in both bold and subtle ways, the Torah emphasizes to us the importance of never causing another person the pain of embarrassment.

These tzedkah boxes from Vessels of Light are simple and earthy in design. The art of faith creates in this world while paying close attention to the creator of all. Man is commanded to resemble the creator. Through the art this connection can be felt the most. ″Vessels of Light″ join the four elements - fire, wind, water and earth. May your vessels be plentiful.