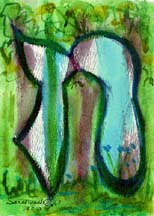 From Leviticus 9:1 - 11:47
After seven days of investiture into the Priesthood, Aaron and his sons assume their offices and offer communal sacrifices on the EIGHTH day (Shemini). A fire from God, symbolizing Divine blessing, consumed their offerings.

Two of Aaron’s sons, Nadav and Avihu, brought an incense offering on their own initiative, and are struck down by God for their actions. Instructions from God and Moses to Aaron and his remaining sons with respect to public displays of grief make it amply clear that the priests hold a consecrated and elevated position, which takes priority over their personal needs. To prevent a recurrence of priestly error, the priests were warned to refrain from imbibing any intoxicant. 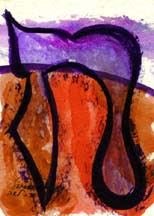 The sons of Aaron, Nadav and Avihu, took a pan, and placed fire within, and put incense upon the fire. They brought before God a strange fire which they had not been commanded to bring. A fire came out from in front of God and consumed them; they died in front of God. Moses said to Aaron, 'This is what God had referred to, "I will be sanctified by those close to me, thus I will be honored by the entire people,"' and Aaron was silent. (Leviticus 10:1-3)

I find this one of the most interesting parts of Leviticus... what really happened at the alter? What could those two boy priests have done that was so evil that they were smote by G'd in front of their father? This is a source of much discussion from the rabbis... Take a look at this.

The art work today two interepretations of the letter Chet by Sarah Leah. The letter Chet is the eight letter of the Hebrew Alef Bet. Sarah Leah shares this Kabbalahistic explanation for the letter chet: In meditation the letter CHET frequently presents itself as a door way. It is safe to go through this particular doorway because it is constructed of a VAV and a ZAYIN which, by virtue of their numerical value, allude to the name of God as explained above. It is also possible to ask for an ANGEL to guide one when passing through the CHET. For more on Kabbalah, explore here.
Posted by DrMom at 10:40 AM