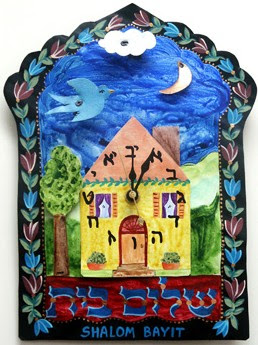 I know that my family and I are truly blessed. My boys are young. Even though my six year old talks about joining the service, I think it is unlikely that he ever will. I trust it is only a stage. I support the armed services but I know that I don't send my children to a war zone. Selfish- yes, but I am a mother first and foremost.

Given that I am thinking of my new home, I can't help but reflect on the families whose loved ones may not becoming home or if they do return, they return different from when they left. Below is a story about a Jewish Soldier in Iraq. For the complete story please go to this link from the Jewish Soldier Foundation.

Shortly before press-time, 26-year-old Army Specialist Joe Kashnow’s right leg was amputated below the knee, a procedure necessary due to wounds he sustained during his tour of duty. Iraq “was everything,” Kashnow says. “It was miserable. It was wonderful. You’re away from home. You’re away from every creature comfort of your life, everything that’s been a part of your life. Every day was different.” ...

On September 17, 2003, Kashnow was driving a Humvee north of Baghdad when a bomb detonated nearby. The explosion broke both bones in his calf and damaged two arteries. Kashnow’s faith is helping him. “I believe very strongly that things are somewhat meant to be, in addition to free will,” he says. “Being Jewish is a big part of who I am. I’ve handled this pretty well, actually. I’ve never really sat around and done the ‘why, oh why has this happened to me?’ thing.”

As Kashnow was preparing for surgery, he was overseeing the Jewish Soldier Foundation (www.jewishsoldier.org). Based in Kashnow’s hometown of Baltimore, the JSF sends Jewish goods to servicepeople overseas, which he says are hard to come by, and advocates for their religious rights in the armed forces. The JSF plans to lobby Congress to give Jews Shabbat off when based in the United States–a goal that resounds on a personal level for Kashnow, who is Shomer Shabbos and has had difficulty maintaining his observance. After his recovery, Kashnow hoped to expand the JSF web site’s Wall of Honor, which currently recognizes four Jewish servicepeople who died in Iraq and Afghanistan. 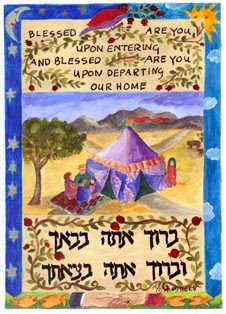 Iraq provided a few high points for Kashnow’s Jewish life, though: while stationed in Tikrit, he paid a visit to the palace of Saddam Hussein’s second wife, Samira Shahbandar. “I’m probably the first person to daven and lay tefillin in Saddam’s palace,” he boasts. Kashnow was brought up with what he described as Conservative Judaism, but he is moving toward modern Orthodoxy. “To me, it’s a constant road,” he says. “Anyone who’s truly into their religion never stops growing.” ...

In contrast to the trauma of war Arel Mishory, a Philadelphia native created these fun pieces for a Peaceful Home. I definitely see them in a brightly colored kitchen. And who wouldn't mind clock watching if this was the clock you were watching?
Posted by DrMom at 12:10 PM