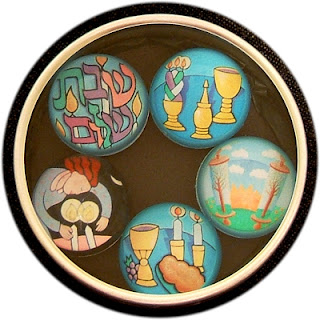 As I settled into my seat on Flight 1272 bound for Chicago, I glanced at the passengers filing down the aisle. My Jew-radar immediately went off; in addition to the business travelers toting their laptops and briefcases and the pleasure travelers wearing shorts and Walkmans, I spied several suede kippot, a striemel and ankle-length skirts.

Despite our shared heritage, I didn't bother acknowledging them. They were strangers. And I live in New York, where strangers seldom exchange greetings, even if they recite the same prayers.

The plane rolled toward the runway and I waited for takeoff. No such luck. The pilot announced the flight was being delayed three hours due to stormy weather conditions in Chicago. I glanced at my watch nervously. Usually, I avoid flying Friday afternoons for fear I won't arrive in time, but on summer weekends when Shabbat doesn't begin until 8 p.m., I figured I'd be safe. I figured wrong.

But I calculated that I could just make it if I didn't claim my luggage and jumped into a taxi. I turned around to check on my co-religionists. Two kippot were examining their watches. The chasid was on the airphone.

A half-hour before arrival, the pilot announced O'Hare Airport was shut down and we were landing in Milwaukee until we could continue on. My stomach sunk. Candelighting was an hour away. I'd never make it on time. Like most religious Jews who work in the secular world, I'd experienced my share of close calls. But I never knowingly violated the Sabbath. Now, I was stuck. 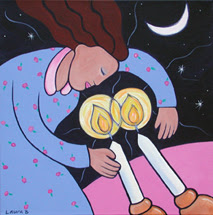 By now, the kippot and long skirts were huddled in the back of the plane. They had been joined by others. Shabbat was bringing strangers together.

It was time to introduce myself. We're going to get off in Milwaukee, a young man told me. The chasid had called Milwaukee's Chabad rabbi, who offered to host any stranded passengers for Shabbat. Come with us, he urged. I nodded with relief but returned to my seat crestfallen since I had planned this weekend with my family for months.

My non-Jewish seatmate, noticing my despair, inquired what was wrong. When I told him the story, his jaw dropped.

"Let me get this straight," he said, "You're getting off the plane in a town where you've never been with people you don't know to stay overnight with complete strangers?"

For the first time that day, it occurred to me just how lucky I was.

When the plane landed, the pilot announced we were disembarking for religious reasons. Passengers stared at us, dumbfounded. My seatmate bid me farewell as if he didn't think I'd survive.

But I quickly realized I was among friends. As I attempted to carry my bags off the plane, a woman insisted on helping me. When we crowded into cabs to take us to the rabbi's house, the chasid insisted on paying for me. And when the cabs pulled up at the home of the rabbi and rebbetzin, they ran outside to greet us as if we were long lost relatives.

The sun set on Milwaukee as they ushered us into their home, where a long table was set for Shabbat with a white tablecloth, china and gleaming kiddush cups. When I lit the Shabbat candles, a wave of peace washed over me. With all that had transpired, I was warmed by the notion that the world stops with the first flicker of Sabbath light. 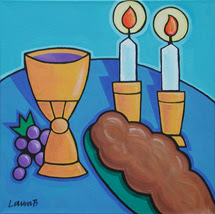 Over a traditional Shabbat feast, the rabbi enchanted us with tales of the Baal Shem Tov and informed us that our re-route to Milwaukee was due not to the world of weather but of Divine providence.

We lingered over our meal, enjoying our spiritual sanctuary in time after the stressful day. Zemirot (Shabbat songs) filled the room. We shared disappointments about our unexpected stopover. Most of the group was traveling to Chicago for their friend's aufruf ("calling up" the groom to the Torah on the Shabbat before a wedding) and wedding and were missing the aufruf. The chasid and his wife were missing a bar mitzvah.

We pondered the meaning of the departure from our journey and marveled at the coincidences. I had attended camp with my roommate, a couple had conducted business with my father, a man had studied in yeshiva with my cousin, the chasid used to work in my hometown of Aurora, Ill., and I had once spent Purim in Crown Heights with my hosts' son.

Exhausted as we were, everyone was hesitant to leave the table to go to sleep.

The next morning, a lively tefillah was followed by a leisurely meal where we exchanged stories about our lives, careers and dreams. We nicknamed ourselves the Milwaukee 15 and wondered if future generations would retell the story of the flight that didn't make it in time for candlelighting.

Saturday night, we made a regretful journey to the everyday world. But before we began the final leg of our journey, I called my husband to tell him all that had transpired. 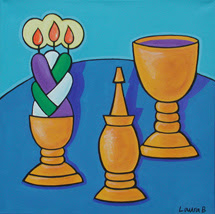 "Who did you spend Shabbat with?" he asked worriedly.

I pondered how to explain who these former strangers were who had given me object lessons in Shabbat hospitality and in the power of Shabbat in bringing Jews together.

And, then as swiftly as a 747 can leave the tarmac on a clear day, I realized the truth: miles away from my parents, husband and home, I had accomplished what I set out to do when I booked my ticket: I had spent Shabbat with family.
Deena Yellin, from Chabad.org

The circle of magnets and the paintings above are from Laura Bolter, a Kansas City artist who paints and does graphic design. Her colors are bright... like the lights of Shabbat. These magnets would be a great treat for a Hebrew teacher, wouldn't they?
Posted by DrMom at 10:13 AM

wow, what a great story. Tis true that even when we are alone, we have *family* around us. And thank you for sharing the magnets. gives my brain a few more ideas to use with my clay.

It is a pleasure to share, my dear Kathi! Shabbat shalom to you and yours!

How wonderful to have my art included on your blog and with such a great story. Thank you and Shabbat Shalom!