Sh’ma yeladim and hear us well
For now is the story of Purim to tell.
It took place in Shushan so long, long ago.
Now off to Persia we all will go.

In this beautiful kingdom ruled a king
A king with no brain, who’d think such a thing?
He spent all his days and his nights having fun
Parading his wealth in the warm Persian sun.

A queen named Vashti was his loyal wife
She promised to love him all of her life.
She promised, that is, until he did ask
For her to perform an unthinkable task.

At his grandest of parties the king did command
Queen Vashti dance for royal men of the land.
"I am Not your servant, and dance I will Not!"
Vashti refused the king’s sexist plot.

For Vashti, you see, was not known as a fibber
She was, in fact, history’s first women’s libber.
Vashti was banished - away she did go.
Where did she go? That we do not know.

In this fair kingdom lived also the Jews
Who could not practice the religion they choosed
No Torah, no Challah, no Matzah Ball soup
For a villain named Haman had started a coup. 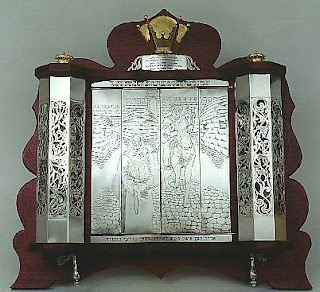 Meanwhile back at the palace grand
An announcement went out throughout the land
A new queen to be chosen in an unusual way
In a beauty contest held the very next day.

One such maiden had brains and had grace
Esther was her name…Such a pretty face!
A Jewess of humble origins and needs
With the kind of bod that would make a heart bleed! 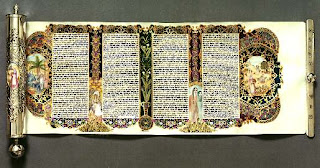 Encouraged by her Uncle (or was it cousin?) Mordechai
"I beg you dear Esther, this you MUST try"
"With your brains and your beauty YOU he would choose
"Go, go, go, go! "Comb your hair. Wear nice shoes!"

"Besides that my dear,
With your grace and your charm
You will blow them away.
You’ll be on King Achashverosh’s arm!"

Unsure of herself but willing to go
Because she loved her Morty so
She entered the contest
But said, "Uncle dear
Promise me that you’ll always stay near."

Mordy did promise and promise he did:
“You betcha – I’ll always be here, Kid.”

The contest was held - They came one and all
And Esther of course was the Queen of the ball.
Chosen for her beauty in a contest quite shallow
Esther learned to love this not-quite-clever fellow 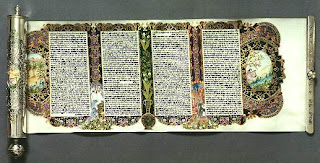 Though Achashverosh chose her
And she was now queen
There was one rotten rule
She had not foreseen.

Under penalty of death she had to obey
The following rule in an unbending way:
Her new husband commanded she could only see him
When HE chose to see her - and on HIS whim
by Dana Baruch and Robbi Sherwin
© 1998 all rights reserved

For more of this ballad, you have to go
To a special site, that you can know
Follow the link and open your eyes
You will be in for a lovely surprise

The story of Esther above I have shared
A story of heroes and people who cared.
Mordecai, Vashti and Haman that gorilla
All can be found inside the Megillah 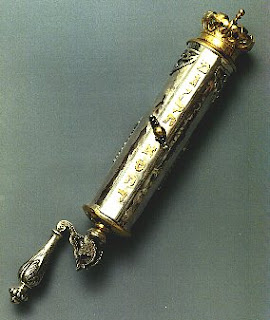 The megillah is scribed by the talented sofer
Perfectly written if that we are sure
Each so precious and unique from its maker
Its not a grogger so don't shake her.

A box, container, receptacle or case
The megillah must have a special place
Yosef Davidoff the silversmith who made these
To look at such beauty makes me weak in the knees.
Posted by DrMom at 8:59 AM