The Torah portion for this week comes from the parsha Bo. In this parsha, the final three plagues are cast down upon the Egyptians- locust, darkness and the killing of the first born.
In addition to such evil, G'd creates the first commandments. Among these was that men must wear teffilin. Traditionally worn only by men, observant boys are taught do wear these two months prior to their bar mitzvah. They learn the proper procedure for wrapping the phylacteries. Briefly One of the boxes (the "hand Tefillin") is placed upon the left arm so as to rest against the heart - the seat of the emotions, and the suspended leather strap is wound around the left hand, and around the middle finger of that hand. The other box (the "Head Tefillin") is placed upon the head, above the forehead, so as to rest upon the cerebrum. In this manner our attention is directed to the head, heart and hand. It teaches us to dedicate ourselves to the service of G-d in all that we think, feel and do. It is also to teach us not to be governed solely by the impulse of the heart, lest that lead us into error and transgression. Nor are we to be governed by reason alone, for that may lead to harsh materialism.

Placed on the arm opposite the heart, and on the head, the Tefillin signify the submission of one's mind, heart and actions to the Almighty, as well as the rule of intellect over emotion.

As times change, many women are finding meaning in the wearing of tefillin as well as fulfilling other commandments which traditionally have only applied to men. 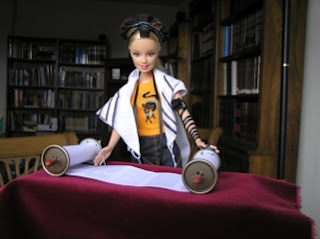 The Sofrut Jen Taylor Friedman who created the Tefillin Barbie also has made beautiful pieces of art... here are some of her creations: