Nearly 30 years ago this week (based on the Hebrew calendar), a young girl stood before her congregation and flawlessly read the Torah. The portion had special meaning. It was one which everyone in the congregation- from youngster to Temple elder- was familiar and her father had read that identical portion some forty years earlier. The Torah portion was Yitro, the Exodus chapters which include the 10 commandments and that girl was me. I have had opportunity to read it again- 5 years later, 10 years, and then on my 20Th anniversary. This year I will commemorate the occasion (albeit a touch early) with this post.
Rather than look at pictures of two tablets, I thought let's look at beautiful b'nai mitzvah art... I invite you to enjoy them.
The piece above is by the artist Joan Landis whose illustrations have been featured in major publications. 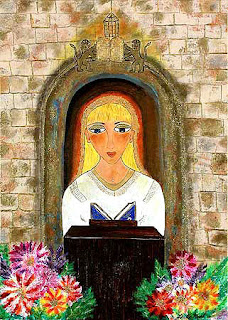 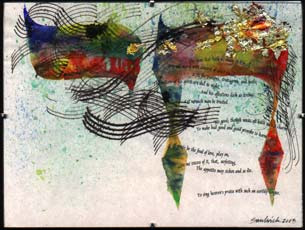 Leslie Naveh, like many of the other artists we have seen, lived in the United States and moved to Israel to live and grow her art. Lelsie recognizes that her pieces are whimsical and childlike- which makes this Bat Mitzvah girl even more delightful. Jenny and Rodney Saulwick are a creative couple who live in Australia. Their work is multimedial- this mature piece includes Inks, paints, marker, pencil, gold-leaf, toothbrush(!), computer font, on Cartridge paper.
So, wish me a Mazal Tov... and go do a horah in my honor.
Posted by DrMom at 4:44 PM